Crisis in prehistoric Syria, 8200 years ago?

Tell Sabi Abyad is a key archeological site in Northern Syria, extensively excavated from 1986 to 2010. The excavations give evidence for a continuous settlement in the Neolithic period, from about 7200 to 5500 BC. Significantly, substantial change in the nature of settlement and the associated material culture was found to occur at about 6200 BC. There were alterations and innovations in, for example, settlement area, architecture, pottery production, ceramic symbolism, use of seals, farming strategies, and burial practices. The many changes predominantly occurred at a time of substantial climate change, associated with cold and drought: the so-called 8k2 climate event. Often, changes in climate are associated with societal crisis, culture collapse and forced migration. However, the research at Tell Sabi Abyad indicates a remarkable resilience of the local Neolithic population: the community did not collapse but successfully adapted to the changing environmental conditions.
:download pdf:

Under the volcano and far away. Effects of the Bronze Age eruption of Monte Somma-Vesuvius on settlement and land use in the Campanian and Pontine coastal plains

This article discusses the consequences of the Early Bronze Age eruption of the Monte Somma-Vesuvius that devastated the proximal areas around the volcano around 1900 BC and must have caused a crisis as the substantial population sought refuge elsewhere. In particular, it investigates the hypothesis that refugees fled north along the Tyrrhenian coast and settled in the Pontine coastal plain, which lay at the basis of the NWO Open Competition program The Avellino Event. Based on new environmental reconstructions of the Pontine plain and on the available archaeological evidence both there and in the buried landscapes near the Vesuvius itself, its suitability for Early Bronze Age settlement and land use is assessed in detail. The article concludes that though suitable, the population density of the Pontine plain remained very low until at least the Middle Bronze Age, some 150 years after the eruption.
:download pdf:

The years AD 249-268 presented a period of serious crisis. The Roman Empire lost its military supremacy and started to incur losses and defeats at practically all borders. Furthermore, devastating epidemics returned from 252 onwards. In seriously devastated areas, where war became an endemic phenomenon, such as the Balkans, southwest Germany, and northern Gaul, this amalgam resulted in a collapse of prosperity and in demographic decline. But not just there: fiscal pressures and incidental wars also hit other regions. Foraging soldiers added to the misery, especially along busy transit routes. There was a decline of governmental stability. Lost battles regularly led to usurpations of imperial power by dissatisfied soldiers who proclaimed their general emperor, hoping to receive more food, reinforcements and commodities, and they subsequently had to fight the armies of reigning emperors and other pretenders. Traditional forms of imperial representation, to which most emperors adhered, were no longer convincing and did not keep soldiers from unruliness.
:download pdf:

Crisis or Metamorphosis? The end of the Bronze Age in the Eastern Mediterranean

There can be no doubt that the eastern Mediterranean saw momentous changes during the late 13th and 12th century BC. Various ancient kingdoms, including major states such as the Kingdom of the Hittites and the palace world of the Mycenaean Greeks collapsed, and numerous important cities, such as Ugarit, Troy, Mycenae or Hattusa, were either destroyed or abandoned. Most scholars argue that a number of factors, including climate change (with droughts causing bad harvests and famine), natural disasters, piracy, migrations and invasions by the so-called ‘Sea Peoples’, and perhaps even plagues caused a perfect storm, that caused a ‘system collapse’. New discoveries and reevaluations of old evidence suggest, however, a slightly different picture. This paper argues that, amidst all the destruction and mayhem, this period is also characterized by a number of important technological innovations, the emergence of new identities and ideas, and – in some areas – a remarkable degree of stability.
:download pdf:

From ‘LUGAL.GAL’ to ‘Wanax’. Kingship and political organisation in the Late Bronze Age Aegean

The Archaeology of Late Bronze Age Interaction and Mobility at the Gates of Europe.

Social Interactions and Status Markers in the Roman World

Afratì-Arkades (Crete) between the Early Iron Age and Orientalizing Period

Anchoring Roman power in the Greek world: the political culture of Roman Athens

Hellenistic and Roman landscapes of Southern Italy: integration and comparison of field survey data for settlement and land use analysis 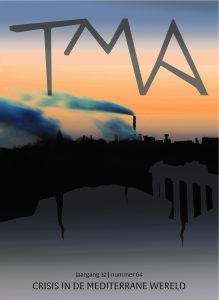