Late Bronze Age, monumental architecture in the Argive Plain consisted of a wide range of fortified structures, funerary monuments, and engineering works. Beyond these large-scale constructions, the Mycenaean landscape must have been dotted with domestic housing, farms, workshops and many others that must have housed every possible aspect of daily life. This paper examines how people in the Argive Plain and surroundings in the 13th century BC managed to build large-scale, while also taking care of daily agricultural and other activities. Ingold’s concept of the taskscape illustrates this very well: when comparing the building efforts and selected craft activity efforts with the agricultural activities and burdens, it seems that resources employed outside agricultural work were of sufficiently small numbers to allow such work alongside agricultural work, especially if elites would respect the pivotal agricultural calendar. Whether elites allowed people to prioritise agricultural tasks is not known, and the need for more labour forces was perhaps more concentrated in the last few decades of the 13th century BC. However, despite this period of possible labour pressure, people’s flexibility of moving between jobs (building, agriculture) could have grown their resilience enough to withstand further pressure towards 1200 BC.

Satricum is often regarded as one of the few well-excavated pre-Roman settlements in Latium Vetus. Studies have so far primarily focused on the rather well-defined contexts – specifically hut features, (rubbish and cooking) pits, tombs, and votive deposits – which have been used to trace the settlement’s development from ca. 850 to 500 BC. Considerably less attention has been paid to the more ambiguous layers containing remains of demolished and destroyed buildings, colloquially referred to as ‘destruction layers’. Such layers are not easily associated with a particular structure and are often ignored in discussions of issues such as spatial organisation. They do, however, testify to the continuous process in which structures were reused, rebuilt, remodelled, and destroyed. In this article, we build on the digital elaboration of archaeological data recovered by the University of Groningen at Satricum between 1979 and 1991, enabling us to assess the traces of destruction as a testament to the rapid development of this urban centre. Two discussed destruction phenomena attest to the reuse of building debris in both small-scale and large spatial reorganisations of the settlement.

A hill of gold in Afghanistan: Tillya Tepe, the Warrior Clasp and globalisation in antiquity
Merlijn Veltman

This article investigates the Warrior Clasp from the site of Tillya Tepe, Afghanistan (first century AD), in light of the discussion on Hellenism and Hellenisation in the Middle East in the centuries after the conquests of Alexander the Great. Through an art historical examination of the iconography, style, material and production method of a single example object from the site – the Warrior Clasp – the author argues that the material culture of the site, which was often seen as ‘Hellenistic’ is in fact much more complex. Different strands of iconographic information, from the Hellenistic world as well as from the Eurasian steppe, and local and non-local materials come together within the object. This complexity is the result of incipient globalisation in the region, in which artisans were able to absorb, transform and appropriate different iconographic traditions into a local style.

Excavations from 2001 to 2005 at the Roman fort of Oudenburg yielded many new insights into the internal configuration of a Mid- to Late Roman coastal fort and its occupants. Within the vast amount of tile fragments, only three stamps can be discerned. Two of these stamps belong to the same, so far unknown and unexplained type. The archaeological context of one of the tile fragments suggests a dating of the stamp in the third century AD. These stamps are the focus of this paper which describes the intensive search for a possible explanation of the characters. Based on comparative research, the round stamp figure with cross-shaped letter composition appears to form the text ‘I V S T’. A military acronym can be excluded. An interpretation as ‘control mark’ and the reading as ‘IVST(VM fecit)’ (‘properly/correctly made’) offer a valuable hypothesis.

Ascending and Descending the Acropolis: Movement in Athenian Religion

Death in Late Bronze Age Greece. Variations on a Theme

The Origins of the Roman Economy. From the Iron Age to the Early Republic in a Mediterranean Perspective

Into the Wild: Hunting in Late Bronze Age Mainland Greece

Changing use, changing needs? The use of amulets from the first century BC to the early Christian world 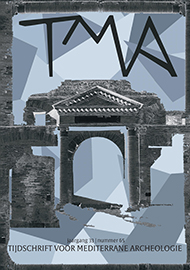