Tradition, competition and power. Cremation and the rise of the aristocracy in the Iron Age at Veii


Quattro Fontanili is one of many Villanovan cemeteries in the periphery of Veii in South Etruria. Unlike the others, however, it has been well excavated and was quickly published, thus providing archaeologists an excellent opportunity to focus on the operation of social mechanisms in a past society. In this article the much debated transition from cremation to inhumation is viewed in the light of strategies of social dorninance. In the 9th century BC everyone in Quattro Fontanili was cremated. At the beginning of the 8th century BC inhumation started to appear and soon became the dominant rite. This transition was accompanied by a sudden growth in the quantity and diversity of grave goods, suggesting intense social competition. Its sharp contrast with the preceding era probably indicates the operation of a burial ideology disguising incipient hierarchisation in the 9th century BC. Female burials were much more innovative than male ones, which rigidly adhered to tradition. It therefore comes as no surprise that the first inhumations were female. The introduction of this new rite had far-reaching consequences for the appraisal of cremation. At one stroke this became the burial mode of the ancestors, thus playing a key role in the struggle for power. Influential members of the community succeeded in claiming cremation as their privilege. Moreover, statistical evidence of the rate of plundering shows, that in contrast to other burials, the location of cremation graves was clearly marked on the surface, possibly by a small tumulus or a stone. The intimate bond with the past expressed by cremation helped justify an elevated social position. Only at the end of the 8th century BC, when a new hierarchy had established itself firmly, did the elite decide to abolish cremation altogether.
:download pdf:

Death, ornament, and the individual in Geometric Athens


The development of Athenian funerary customs from the Sub-Mycenaean to Late Geometric periods indicate a relationship between the funerary vase as a local product, the dead in the graves, and the increasing individualization in Athenian society. This relationship is visible in grave form and content in the Kerameikos in Athens, but especially so in the decoration applied to the funerary vase. This article is focused on that decoration and addresses the increasing complexity of geometric design as well as the increase of surface area occupied by design; this is then set against the backdrop of the increasing social stress in Athenian society in order to arrive at a plausible explanation for this phenomenon.
:download pdf:


Traditionally, the Iron Age hut urns from Latium are considered to be imitations of domestic architecture. A reexamination of the architectural characteristics of hut urns and of their funeral setting demonstrates that hut urns are rather conventionalized funeral symbols.
:download pdf:

The image of self-killing in antiquity


The present article is an expansion of chapter 5D ‘The image of self-killing’ in the author’s general study From Autothanasia to Suicide. Self-killing in Classical Antiquity, Routledge, London 1990. 57 out of the 70 representations discussed here concern the use of weapons as tools to put an end to one’s life. The percentage of 81 % is strikingly higher than the share of 40% of 960 cases found in the literary sources. Ajax was the model of heroic suicide, as is proven by his dominating presence in the picture: he already accounts for 38 of all 70 recorded instances. On the other hand, hanging is under-represented among the images of self-killing. This observation fits well with the evidence from the literary sources presenting self-hanging as an utmost degrading and cowardly way out. In this way iconography confirms the view that in ancient shame society suicide was preferably seen as a deliberate act of manly volition.
:download pdf:

Toys from children’s graves. Death as a source of life.


The investigation of Greek and Roman children’s graves, including gravestones and sarcophagi, makes it possible to identify certain gravegoods as toys. Found in their original context, these playthings provide us with information about age, sex, and status of the buried child. These results form an important addition to what was already known from written sources and non-funerary art; because of their premature death, we can acquire a clear image of the daily life of these children in Antiquity. The different aspects of studying the child by means of researching complete gravecontents are here illustrated by examples taken mainly from the Athenian Kerameikos. The long period in which this cemetery was in use, and its fairly complete excavation and publication, give an excellent opportunity to work on groups of gravegoods containing toys.
:download pdf:

Mortality and mentality. Some remarks on an archaeology of death


Archaeologists have made much use of graves and grave inventories in order to investigate the variation of social statuses and richness within past societies. In addition, the study of graves and grave gifts may shed light on the way the living are aware of their own mortality. This awareness generates a complex set of unconscious collective attitudes, acts, ritual, taboos and rules. The history of mentalities, and specifically the studies by Vovelle and Ariès, offers a perspective for a more complete archeological study of death through a vertical history of death, which consists of three levels. This perspective includes the study of demographic evidence, the actual rituals, the collective discourse of death, and changes in each of these levels. Many archaeological studies have been directed towards the first two levels, while the ideological and cognitive aspect of the way a society deals with death is not yet fully developed. By making use of the theories and methods of the French history of mentalities archaeologists can gain much deeper insights in the long-term processes of the cognitive aspects of part societies. Because of their universal character and the long history of attention given to them by archaeologists, graves are one of the best suited sources for a study of mentality within an archaeological perspective.
:download pdf:

Male or female? A methodological study of grave gifts as sex-indicators in Iron Age burials from Athens 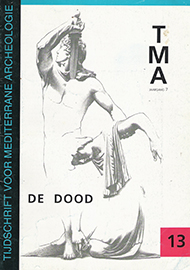