In search of an urban residential form

This article demonstrates that our own definition of “living” is a major factor in the investigation of the subject in antiquity. The activities of eating, drinking and sleeping cannot themselves archaeologically be recognised as isolated features in the early urban history of Latium (600-400 BC). This article presents different building types in this period which housed domestic functions. Sufficient evidence indicates that these houses also possessed commercial, industrial or cult functions. In an urban context the plans of the houses therefore show a contrast: domestic functions are secluded from public life, while industrial functions, such as shops, face the outer world.
:download pdf:

Roman mosaics, and especially those with inscriptions, are an important source for our knowledge about daily life in ancient times. Mosaics with inscriptions often had the intention of impressing visitors. Because the commissioner wanted to display his wealth, possessions, benefactions and status, we find these mosaics in the more public rooms in the house, such as vestibula and triclinia, which where accessible to clients and more intimate guests. Mosaics with inscriptions are often easy to interpret and can therefore be used in turn to interpret mosaics bearing the same themes but having no inscription.
:download pdf:

Sheltered living at the end of antiquity. The citadel of Pessinus (Turkey)

This article briefly presents information concerning an early Byzantine fortress, excavated by a Belgian team from Ghent University. The fortified settlement was erected in the 6th century A.D. near the Central-Anatolian town of Pessinus, an important religious metropolis with Phrygian antecedents. Although probably not permanently occupied, this fortification prolongued the life of the former ancient city into the 11th century. Combined investigations of the fortress and of living quarters in the lower city may well shed some light on the decline of city life in the Dark Ages of Asia Minor.
:download pdf:

Nilotic scènes were a popular decorative motif in the Roman world, as may be seen by many examples which have been preserved in Pompeian houses. Their meaning is variously understood, either as scènes of an exotic, colonised world, comparable to the genre of Chinoiserie in later Europe, or as propaganda for the Egyptian cults. From a study of the Nile Mosaic of Palestrina, the earliest and richest of the extant examples, it appears that the essential motif of these scènes is the Nile flood and its beneficial effects on Egypt, which are given by Isis and Osiris. The meaning of these scènes as symbols of welfare and divine providence made them generally acceptable as decorations for surroundings where a festive mood was required, such as dining rooms and gardens, just like Dionysiac motifs.
:download pdf:

Living in a tower. A view on the possible residential functions of Attic towers

Several ancient towers have been discovered in Attica. Various functions for these isolated towers and tower complexes have been suggested, based on their location, plan, construction and finds. These suggestions will here be examined together with the possibility of these towers, both military and civil, as a place of residence.
:download pdf:

The American-European schism. Theoretical trends in the archaeology of death

In this review article of Regional Approaches to Mortuary Analysis (edited by Lane Anderson Beck, Plenum Press 1995), the author evaluates the influence of the theoretical ideas of British post-processualists on their American colleagues working in the field of the archaeology of death. Although the author supports the adoption of a regional scope in mortuary studies, he believes the contributions are still characterized by an essentially passive notion of material culture, ecological determinism and a preference for cross-cultural generalisations. As European archaeologists seem more willing to acknowledge the active role of material culture, this will inevitably lead to a widening gap between the archaeologies of the Old and the New World.
:download pdf:

Rubbish! The archaeology of garbage

Houses and society in Pompeii and Herculaneum

Theory and practice in archaeology 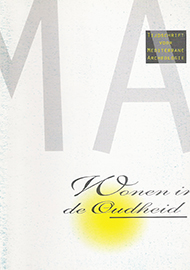