Archaeology and Landscape, Time and Memory

The author examines a number of recent anthropological/geographical approaches of the notion ‘landscape’ (especially those used by T. Ingold and E. Hirsch) as to their contribution towards a scientific theory in landscape archaeology. The current lack of a theoretical insight which encompasses the various environmental, archaeological and documentary sources in order to write landscape history is, in the author’ s view, the cause of the naivete with which landscape archaeological data are linked to historical events and processes. Time, it is argued, is a vital key to understanding landscape history.
:download pdf:

Over the past thirty years archaeological field surveys have aimed mainly at the discovery of rural settlement patterns. In the last decade, however, a more holistic approach has been adopted in which the soil is considered to be an archive containing higher and lower densities of traces of past human activities (i.e. sites and non-sites). The authors suggest that the rise of the urban survey in the 1980’s was closely connected with this new approach. Furthermore, it describes the aims and methods of this new type of survey. These are illustrated by a case study from recent field work carried out by the authors in southeast Italy. The paper closes with some comments on the methodological aspects of urban survey.
:download pdf:

In this article, the author discusses some problems of Mediterranean survey archaeology. The coherence of the archaeological record is posed as a methodological problem, specifically whether the finds are distributed as a blanket cover with locally higher and lower densities, or in concentrations of ‘sites’ with ‘junk’ in between. ‘Site-oriented’ archaeologists tend to regard the landscape as a passive entity which is exploited from the sites. Those advocating the former position (including the author) consider settlement and landscape as engaged in a dialectic relationship, mutually influencing each other. ‘Nonsite archaeology’ however raises the technical problem of measuring the density of the archaeological remains independently from present-day surface use and vegetation. A field technique is here proposed which eliminates this problem. Illustrations are drawn from the University of Leyden’s RiuMannu Survey Project on Sardinia.
:download pdf:

In 1983-89 the Department of Mediterranean Archaeology of the University of Amsterdam, in collaboration with the British School at Athens, conducted a program of intensive field walking east of Sparta in Laconia on the Peloponnese. The Laconia Survey led to the identification of over 400 sites (including villages, farmyards and villas, as well as graves and shrines) from the Late Neolithic to recent times. The first of two volumes presenting the results has recently appeared. As a sequel, the Amsterdam Department began work in 1995 at Geraki (ancient Geronthai), southeast of Sparta and outside the Laconia Survey area. Previous investigations of the imposing acropolis with its fortification wall indicated occupation from the Early Bronze Age onwards. The new Geraki project aims at revealing the long history of human occupation in more detail. In the two campaigns thus far (1995-96) the wall and other standing remains have been mapped out and described with the help of modem geodetical and other technology. An intensive survey has yielded numerous artifacts, ranging from the Late Neolithic to recent times (excepting notably the Mycenaean period). Geophysical work has also been carried out, and spolia, built into various local Byzantine churches, are being examined. Plans for future campaigns include a geomorphological study and a series of test trenches, which may be followed by full-scale excavations in selected areas.
:download pdf:

Since 1990 archaeological excavations by a Belgian team in the ancient town of Pessinus (central Anatolia) have been supplemented by field survey. A geo-archaeological approach has been tested within the limits of the ancient Hellenistic, Roman and early Byzantine town. Based on a GIS especially designed for the area, an integrated analysis of the evolution of the landscape and the settlement system has been conducted. Some of the archaeological questions have been answered using computer models and geographical methods. This article aims at explaining the methodology of this regional research project.
:download pdf:

Since 1991 three surveys have been carried out in the vicinity of the ancient site at Timpone della Motta near Francavilla Marittima (Calabria). The project is aimed at better understanding the nature of the settlement, and of the relationship between the town and its countryside. Onsite intensive survey revealed the remains of a large settIement on the flanks of the hill dating to the 6th c. BC. Material from earlier periods date the first human activities on this site from the Middle Bronze Age onwards. The regional survey results showed a number of small “Greek” sites, mostly located on the foothills of the Dolcedorme, at the north of the coastal plain. The survey of the lowlands to the south and southeast of the ancient settlement presented no evidence for a rural pattern that could be related to the site. The lack of rural sites in this area could mean that the 6th c. settlement was not selfsupporting in its agricultural needs. Another explanation could be that due to environmental change (e.g. colluviation or reclamation activities), the archaeological evidence was covered by younger sediments or even destroyed. Further research, both archaeological and environmental, will be necessary to provide us with more information about the relationship between the town and its countryside.
:download pdf:

A phenomenology of landscape. Places, paths and monuments

A Mediterranean Valley. Landscape archaeology and Annales history in the Biferno Valley 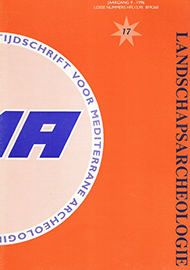