Interpreters of a folksong. Museum, past, and identity on Sardinia

A museum exhibition does not display objects alone, but with them often a hidden message as well. The museum is a social and political institution inspired by a society, which at the same time inspires its people in return. The semiotics of meaning theory offers a basis for studying the intentions behind exhibitions. These intentions can be interpreted in many ways, each visitor picking out the themes which interest him the most. Identity is an aspect which can be relevant in exhibitions. Establishing identity is characterized by elements of the present and the past. The author has studied this in archaeological and ethnographical museums on Sardinia. Although Sardinian culture would appear to have a single identity, it actually consists of several different identities. These can be seen in the presentation of different museums.
:download pdf:

In the second half of the 1st century BC, Istria became part of the Roman Region X (Venetia et Histria). Nowadays the region is divided between Croatia, Slovenia and Italy. This article discusses production sites throughout the Istrian peninsula. Research into the archaeological remains in Istria indicates that most of the production sites were situated in the ager of Pola (65%), whereas the number of sites situated in the agri of Parentium and Tergeste are relatively low (15% and 20% respectively). The majority of the sites (55%) were dedicated to the production of wine and olive oil. Wool production centres and wool dying centres occupy 20%, while 10% of the total amount of production sites were for pottery.
:download pdf:

The fire brigade in the Roman Empire

In the first century BC Rome was quite vulnerable to fire due to the many wood dwellings and warehouses. To limit the risks as much as possible several preventive measures were taken including the institution of a fire brigade by Augustus in 6 AD. At night they would patrol the streets in order to extinguish any sparks as quickly as possible. An organized fire brigade financed by the Empire appeared only in Rome and its ports Ostia and Portus. In Rome the fire department was located in barracks across the city; guardrooms furthermore served as storage and resting places for the patrols. The only surviving barrack is in Ostia. All the firemen were given a specific task so they could work efficiently. They used buckets, pumps, and wagons. The organization of the fire brigade is similar to that of the Roman legions.
:download pdf:

Both collections of essays under review criticize the archaeological use of evolutionary concepts such as big man, chiefdom and state. The approach in the ‘American’ collection (FSI) is more anthropologically oriented. Its focus is the emergence of social inequality in an egalitarian context, and the evolution of leadership and beginning stratification. The terminology (e.g. entrepreneurial) used in some articles, however, and the evolutionary paths implied thereby, too much rings of modern fashions. Yet the emphasis on affluency, rather than scarcity or circumscription, as an explanatory factor is illuminating. The ‘European’ approach (CCCS) discusses the problem of societal evolution in a more general perspective. The essence of its criticism of traditional evolutionism focuses on its conceptual simplicity, which can be summarized by the emphasis on centralization, hierarchy, and increasing complexity. Instead, a more flexible approach is proposed, stressing the importance of heterarchical features. It corresponds with the concepts of corporate versus network modes used by American authors. In the opinion of the reviewer this is an important step forwards.
:download pdf:

Classical archaeology of Greece. Experiences of the discipline

Landscapes of settlement. Prehistory to the present 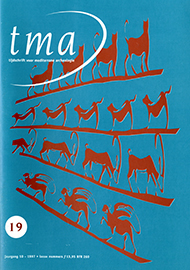