Looking at ancient statues. Gods and portraits in a renovated Roman palazzo and a Roman power plant: Two new statues exhibitions in Rome

In this reflection, the planers of two new and important exhibitions of ancient statues in Rome – a permanent one in the newly restored Palazzo Altemps (near Piazza Navona), and another, which will remain open for at least the next two years in the Montemartini power plant (Via Ostiense) – are considered to have succeeded in arranging ancient statues in a innovative and satisfactory way. We have all grown weary of the endless rows of Roman statues of certain types (e.g. Discus Thrower, Venus etc.) which European museums exhibit next to each other in order to illustrate how a particular Greek masterpiece may have looked, and are much more curious as to why the Romans so fervently copied Greek statues and where they kept these works. The answer to this last question seems clear from the power plant exhibition: in the gardens of the great villas of the aristocracy built on Rome’s central hills, in bibliothecae, on pediments, and on graves. The statues in the gardens, like the statues in the libraries, were there to enhance the world of the living, to elevate the viewer into the enchanted and spiritual world of the gods and the great philosophers and writers. The statues on the graves, laid out just beyond Rome’s main entry roads, slow uncanningly lively faces, the iconography of the ancestors of the foremost families, and of course they were on display here to convince the traveller that these families had the oldest claims to Rome’s soil. The power plant exhibition takes great care to explain the contexts of the statues, requiring an exhaustive study of the lists drawn up by Lanciani, the administrator of the committee responsible for the archaeological finds from the end of the last century and the beginning of this one, when Rome became the capital of Italy and was in need of several new buildings. By comparing the locations Lanciani describes with the many pieces kept in old warehouses, the reconstruction of new and surprising statue groups was made possible. The power plant itself is one of the new structures which were result of Rome’s transition to the capital, and was used to produce energy for the first street lights in its centre. The reconstructed power plant makes a wonderful contrast with the statues, the white and shiny marbles set off against the dark and gloomy machines. It is no coincidence that Chaplin’s Modern times and De Chirico’s paintings immediately spring to mind, since these works of art date from the same time as the power plant: the roaring twenties. The Altemps arrangement is quite different: here we get an impression of how ancient statues were used by the great families living in Rome from the later Middle Ages to the 18th century. Lovely nude ladies such as Venus, Psyche and the like were evidently (and are now again) exhibited in the bedchamber of the lady of the house, while more ‘political’ subjects such as sarcophagi with fighting men were placed in the large hall. The heroes of antiquity were situated next to the entrances to protect these, or in the study of the lords of the house. Most interesting are the statues and busts we know so well from the writings of Winckelmann and Goethe, but which for quite some time have not been on display. It is strange to note that most of the statues which these men really loved the best now leave us cold. I suspect that the stories they told themselves about these ancient work were far more fascinating than the actual pieces. The conclusion is that ancient statues, now that they have regained their contexts (whether the original or subsequent), and thus their stories, are fascinating indeed.
:download pdf:

Scrap for the Soldiers. Roman iron weapons from the Kops Plateau in Nijmegen

Between 1986 and 1995 an archaeological investigation was carried out by the State Archaeological Service (ROB) on the Kops Plateau in Nijmegen. Three successive early Roman Military camps ranging from ca. 10 BC to AD 70 were excavated. A study has been made of the 115 weapons from these camps. These iron weapons included daggers, spear heads, lances, javelins, pila, butts, an arrowhead, and artillery. One of the objectives of this study was to discover why these weapons were found in the ground. Three hypotheses were examined: disposal of scrap; accidental loss of equipment; and votive deposition. The hypotheses were compared with the finds using a number of criteria: context, condition, value, date, and distribution of the weapons. From this comparison the conclusion could be drawn that the weapons were discarded as scrap by the time they entered the ground.
:download pdf:

From 1994 to 1997, the Wroxeter Hinterland Project studied a 30 by 40 km area of modern Shrosphire (UK) in an attempt to understand the Iron Age and Roman settlement history, with an emphasis of the processes of Romanisation and urbanisation as expressed in the site of Wroxeter, civitas capital of the Cornovii. The project relied heavily on modern and innovative technology for data acquisition, management and analysis. This article describes in detail the role played within the project by geographic information system (GIS) technology.
:download pdf:

Material culture in classical archaeology has often regarded as art or as objects useful for the study of typology, dating, and provenance. In recent archaeological studies much attention has been given to social aspects of the past. In these works, however, material culture does not play the central role it deserves. Often the problem is that artefacts (unlike inscriptions) cannot be used as a primary source, they first need to be interpreted. Methodology can be a helpful tool towards understanding the artefact in its social context. In this article it is argued that the use of small artefacts as an indispensable source in studies on social aspects of the past involves two main steps. The first step seeks answers to the ’traditional’ questions just mentioned. This step may be facilitated by using a method which examines the various aspects of the artefact and distinguishes patterns in these aspects. The next is the interpretation, the question of the role of the artefact in its social context. For this second step new questions need to be formulated regarding the social aspects of the object. The method is illustrated with a study on small representations of Roman and local gods in bronze and terracotta from the Netherlands.
:download pdf:

A response to Hans Derks “Myth and Reality in the Archaeology of Ancient Israel” (TMA 18, 1997)

Ideology and even politics play an important and often regrettable role in the archaeology of Palestine. Derks is certainly right in pointing this out once more. This reaction was prompted by Derks’ choice to mark out the late Roland De Vaux as an example of this. De Vaux was a highly respected biblical scholar and archaeologist. He worked in a time when this combination was not yet suspect from the outset. Although his methodology and technical skills were already outdated in the last decade of his life, he has done very important work. As a historian he tried to find a middle position between the two exponents of the opposing schools of the fifties and sixties in the history of Ancient Israel: Martin Noth and William F. Albright.
:download pdf:

Roman urbanism. Beyond the consumer city 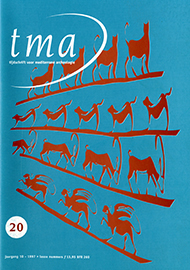