Colonial versus indigenous? On colonial categories in Mediterranean archaeology

Despite the long-standing tradition of studying colonial settlement in the ancient Mediterranean, the very relevance of the terms ‘colony’ and ‘colonial’ for the contexts examined under this heading has hardly ever been examined. Greek and Latin words such as ápoikia and colonia and archaeological evidence for foreign settlers have apparently always been enough to persuade archaeologists and historians alike of the colonial nature of, amongst others, the Greek and Phoenician presence in the western Mediterranean. The one-sided focus on the colonizing forces in this area has been widespread and persistent. Only recently has the role of indigenous communities in the colonial contexts of South Italy been addressed. Even this shift, however, only serves to reinforce the dichotomy, whereas comparison with more recent well-documented colonial situations, e.g. 19th century French Algeria, shows that ‘colonial’ and ‘indigenous’ are not so easily distinguished. These insights have given rise to a ‘post-colonial’ perspective which not only highlights Western colonialist biases of conventional representation of colonialism, but which has also points to the ‘murky’ and complex nature of colonial situations on the ground. Although material culture has received little attention in this perspective, it does play a defining role. The villes nouvelles of early 20th century Morocco demonstrates how material culture in general and urban planning in particular provided a powerful means for upholding colonialist views in the face of a much more complex reality. In short, there is ample scope for a postcolonial perspective in (Mediterranean) archaeology, as it provides the means for a critical reappraisal of conventional representations of colonial situations, and because it also suggests a way forward to explore the subtle and complex realities of ancient colonialism. At the same time, archaeology may also be able to contribute to postcolonial studies by drawing attention to the significance of material culture in colonial contexts, whether in the distant or more recent past.
:download pdf:

Honour and valour as a discourse for early Greek colonialism

Current approaches to ancient Greek colonialsm are heavily influenced by Europe’s own imperial and colonial past. In this contribution the author stresses that early Greek colonialism should be considered in its specific temporal context. He uses both archaeological and literary sources to show that Greece in the late eight and early seventh centuries BC saw the manifestation of local elite whose view of themselves centred on heroic ideals such as reputation, honour and valour. The author argues that exactly these heroic ideals created a discourse which enabled the foundation of the earliest Greek colonies in Italy.
:download pdf:

Colonial situations in antiquity in South Italy: a regional perspective

Following a critical evaluation of the traditional Classical archaeological approach to the Greek colonization of the coastal flats of South Italy, which portrays the Greek colonies as ‘islands of civilization in a marginal indigenous world’, the author presents a case study concerning the Salento region in present-day Puglia. His analysis of regional settlement patterns and cemeteries, based in part on his own fieldwork, shows that earlier studies were unduly focused on the presence of the Greek colony of Taras. It appears that in the Salento Isthmus indigenous settlement expansion occurred well before the arrival of the Greeks, while early urbanization was more of a concerted process than one instigated by Greek presence alone.
:download pdf:

Colonial geographies of the Mediterranean world

The archaeological contribution to the spatial history of ancient colonialism is strongly influenced by archaeological signs such as the urban grid and rigid land divisions. This holds for both Greek and Roman colonization. A number of excavations have shown that interaction between pioneers and indigenous people usually preceeds the formal phase of townbuilding and rational land use. Whereas external colonization of territory outside one’s own culture area, such as Greek colonization in the west, is reflected in the material record, internal colonization is not. As such the early Roman colonization poses a problem that, in the author’s view, can be tackled by mapping regional landscapes with the aim of detecting the various colonial geographies that Roman colonization created in neighbouring territories. For an understanding of the different perceptions of the landscape by colonists and indigenous people, the authors refers to Carter’s Road to Botany Bay, which focuses on the spatial experience of pioneers and colonists in indigenous Australia.
:download pdf:

Mainstream archaeology still views the rise of the ancient urbanization in south Italy as a Greek achievement, with little contribution from the indigenous Enotrians, Messapians or Lucanians (or whatever names the Greek gave to these people). The division in European universities between the pre- and protohistorical and classical archaeological departments only upholds the view that Western-European city culture is rooted in Graeco-Roman achievement. The remains of Graeco-Roman cultures are thus carefully kept and are object of many touristic trips, especially in Italy where Rome, Pompeii, Paestum, Syracuse etc. require enormous maintenance budgets. The remains of indigenous cultures on the other hand are rapidly disappearing in the fields while the ‘blanks’ in the European landscape continue to be filled in. Museums and collections offer no solace in the consumer oriented society; the objects are not considered beautiful enough for restoration or display. Moreover, the prehistorians themselves have contributed to dissociation from indigenous cultures by organizing cultural phases via artifact assemblages and facies. These theories are seemingly objective but, in the author’s opinion are, because of their selectivity, highly biased towards the people with the best manufactorial achievements (e.g. Etruscans and Latins), therefore rendering other peoples even more invisible. It is clear that in the end Italy will get what it now wants: a colonial archaeology. South Italy can especially use the image of a flourishing Magna Graecia in today’s backwater Calabria to propagate the view that with sufficient attention from the Roman government and the indifferent north, south Italy in fact could develop. Correcting the situation is extremely difficult because so many misinterpretations of the archaeological record already begin during excavation. An example is the 1960s excavations at Francavilla Marittima in Calabria, an indigenous site which contains a settlement, an Athenaion and a large necropolis (870 – 550BC). The interpretation of this site as an indigenous village later taken over by Greeks depends entirely on the discovery of Greek or indigenous operations in the configurations of tombs, pots and temples. Because only the very well informed student is capable of interpreting this, a regional archaeology which incorporates the study of the landscape and its perception by traders, by the indigenous population, and by foreign students must have priority.
:download pdf:

Greek and Roman colonization have often been studied and implicitly perceived as phenomena that have quite a number of features in common with the European colonization of Africa, Asia and the Americas (from the 16th century onwards). This means that the discourse of the ‘ancient’ colonisations’ has often been completely dominated by ideas and perceptions derived from our own colonial past and post-colonial present. It is true that some notions which are prominent in the discussions on western-European colonialism seem to have close relatives in the ancient world (e.g. dominance of colonizer, colonizer/native dichotomy, exploitation and forced adaptation of native economies). On closer inspection, however, the correspondences are more apparent than real. The ancient situations to which the term ‘colony’, ‘colonisation’ and ‘colonialism’ have been applied, moreover, appear to be highly varied. Ideas, notions and perceptions derived from pre-modern colonialism should, therefore, be replaced by three closely linked, less biased approaches. First, ancient ‘colonisations’ should be considered as migrations. Migrants invariably encounter autochthonous inhabitants. Integration, therefore, should be the second concept in the study of ancient migrants. During the integration processes, identities are constructed by self-labelling and labeling of ’the other’. That means that ethnic constructions and the way they are expressed in words and material culture should be a third element in the study of ancient migrations.
:download pdf:

The title ‘The decolonization of colonization’ reflects the essence of the historian’s comment on the archaeological studies in this number. It entails the idea that colonization was at the same time the immediate starting-point of decolonization. This approach has been explored by Den Hollander and Prince in a recent article on historical developments in the later half of the nineteenth and in the twentieth century. There is, thus, a clear analogy between the study of colonization by historians and archaeologists as a complex of processes between different cultures and societies. The author wishes to emphasize, however, that stressing the ‘native’ side of the process should not obscure the fact that the power relations were actually in favor of the ‘colonizers’, certainly in modern times, but in classical antiquity as well.
:download pdf:

Between artifacts and texts. Historical archaeology in global perspective 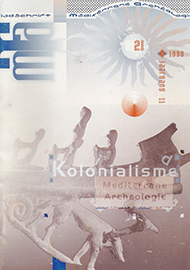