Sukè. About the meaning of the fig in Greek subsistence

This paper explores the place of fig cultivation and consumption in the subsistence economy of classical Greece. It departs from the physical conditions determining the growth of figs (soil, climate, temperature, rainfall). Furthermore specific aspects of fig cultivation are described: the propagation of the trees, fertilization and fruition, yield rates, and nutritional value. Immediate written information of the technical aspects of fig cultivation in classical Greece is sparse and limited in content. Evidence from inscriptions seems to show a particular combination of the growth of fig trees with vines on rented sacred lands, and perhaps also on privately owned lands. Against this background remarks on figs in literary texts are evaluated. Finally, an attempt is made to compare fig cultivation in ancient Greece and more recent practices in traditional Greek agriculture.
:download pdf:

The Greek temple as a testcase for peer polity interactions

Mainstream archaeology postulates a correlation between the increase in material culture and the growing competition and communication between Greek communities since the end of the Dark Ages. The rise of the Greek temple in connection with the grow of the poleis is seen as an important aspect of this idea. The temple is seen as an important medium for poleis to communicate symbolically and especially to compete. But the exact workings of this mechanism have not yet been elaborated upon. It is the goal of this article to investigate these interactions between polities and especially the role of the temple in the framework of the ‘peer polity interaction’ model. The idea of this study is to investigate whether the concept of peer polity interaction can define the material developments and interactions in the early Greek temple. Concretely it tries to investigate if the developments in the Greek temples and the temple sites are in accordance with the positive statements about innovations and interactions which according to Renfrew, in his introduction to the model, can be tested in a culture wherein peer polity interactions are the determining factor in cultural transformations. For this purpose, information about all known Greek temples dating to the late Dark Ages until about 550 BC have been collected and put into a database. Typological and dimensional similarities between elements of the temples have been investigated as a working hypothesis to determine which temples, and possibly their communities, might have influenced each other and thus might have interacted. Put into the geographical and political situation between the communities, these data enable to pinpoint which aspects of the model do seem to work and which aspects work less or not at all. As predicted, most but not all aspects and workings of the model could be investigated and verified. Notably the initial primacy of the poleis in the interactions between temple communities, as the ‘peers’ in title of the theory, can be corroborated in this hypothetical construction. In the analysis the ‘where’ and ‘between whom’ of innovations and interactions could mostly be determined, but the distinction between the kinds of interaction (competition, symbolic entrainment, emulation) proved in most cases to be more difficult.
:download pdf:

Villanovan Culture: equal rights for everyone?

This article forms a summary of the results of my research concerning the social organization of the complex Villanova culture, based on grave evidence from Tarquinia in Etruria en Sala Consilina in Campania. It especially focuses on the presupposition that in the first Villanovan period the community was not differentiated, whereafter in period II a hierarchical society was developed with so-called principesche or chiefs. This doesn’t seems to be completely true, because on the necropoleis was as early as period I a vertical hierarchy present. Attention is also given to the status of the female, which had very long been neglected in the traditional androcentric archaeology. In this article it is argued that also females could acquire a high status and at least some of them, especially the females with grave-objects related to cultic activities, were independent of their male kin.
:download pdf:

The colonial movement of Greeks in southern Italy was a pluriform phenomenon. In this study, a comparison between two regions in Basilicata and Campania is made, based on the landscape, the presence of indigenous Iron Age communities and the initial founding of the colonies Metapontion and Poseidonia. Metapontion and its taking possession of a territory seemed to have been a success form the very beginning around 600 BC, whereas rural settlement around Poseidonia seemed to flourish only from the 4th century onwards. Could this difference be explained by the strong presence of evenly dispersed Iron Age communities in the colonized regions of the Metapontino?
:download pdf:

Use and appreciation of Mycenaean pottery outside Greece. Contects of LHI-LHIIIC finds in the Levant, Cyprus and Italy 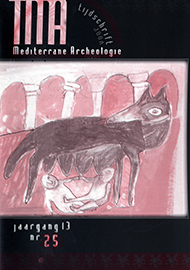