On the basis of their pottery and decorative style a cultural unity may be postulated for the people living in Calabria (Southern Italy) during the Early Iron Age. The Oenotrians, as the Greeks probably later called them, used, next to impasto kitchen wares, also pale yellow or beige pots manufactured by hand of depurated clay and decorated with a matt paint. The earliest classes of matt-painted pots discerned by Yntema and others show friezes with triangles followed in the next period by ’tent’ patterns. In the Sibaritide in the Early Geometric period, next to imported ‘a tenda’ pots, a local imitation was made: the ‘simple tent’ motif. Later on, during the Middle Geometric period the potters in the Sibaritide developed the ‘fringe’ decoration, which probably was associated with weaving. Kantharoi with fringe decoration in the formal burials of males as well as loom weights decorated with the same animals as found on the pots in rich female tombs, indicate, among other things, that the decoration styles were connected with an aristocracy which formed itself in Oenotrian society during the 8th century BC.
:download pdf:

The changing role of Mycenaean pottery in Italy

Pottery made in Greece during the Late Bronze Age (ca. 1600-1100 BC), has been found widely distributed in the central Mediterranean. Within the general distribution pattern, three periods can be distinguished, coinciding with Late Helladic I-II (LH I-LH II); LH IIIA-LH IIIB and LH IIIB-LH IIIC respectively. In this article, the role of Mycenaean pottery in the indigenous material culture is investigated. During the first period, a wide range of Aegean wares and pot shapes occur in the central Mediterranean. According to their contexts, the imported nature appears to have been important for the social role of these vessels. This indicates that they constituted symbolic references to overseas relationships. In the second period, a much narrower range of Mycenaean wares are present, which are to a large extent concentrated at a few central places. The distribution of these vessels appears to have been controlled and they played a role in social and cultural competitions between sites. Mycenaean pottery dating to the third period covers a wide range of pot shapes. Vessel types that can be related to consumption of food and drink are usually concentrated in structures indicative of a certain status and wealth. This shows that not so much their imported nature, but their function was of consequence for their use and appreciation. It is probably for this reason that by this time substantial quantities of Mycenaean pottery were produced locally in the central Mediterranean.
:download pdf:

A debate on chronologies

One of the main problems of Mediterranean Archaeology is the chronology from the Late Bronze Age to the Orientalising period (1200 to 700 BC). The present chronological framework reflects the subordination of indigenous cultural phases to imports from regions with a ‘high culture’ such as Egypt, Mycenae, the Near East or Greece. These imports determine the absolute chronology of the local arrangements even though the imported goods function outside their original context while their biography is hardly known. Especially during a period in which gift exchange for high value goods such as the overseas imports was prevalent, one does not know how long these goods circulated before they were deposited. Moreover, mixed assemblages with local goods and some securely dated imported artefacts are extremely rare during the period 1200 to 800 BC. The danger of a circular argument is manifest and thus one can detect a clustering of events during the 8th century BC when interregional contacts became once more firmly established. However, the interval between Mycenaean imports during the 14th and 13th centuries BC and the recovery of transmarine trade during the 8th century BC is distinguished by scarce overseas contacts. This contributes to scattered regional chronologies based on stylistic sequences with hardly any sound relation in terms of absolute years. Therefore it is not recognized by archaeologists working with these centuries that ’the search for absolute chronology is like crossing a minefield sown with hidden dangers, among them legendary events, relicts of records, preconceived expectations and archaeological misinterpretations. One may attempt, but not necessarily expect to reach the other side in safety’ (Hankey 1988, 33-34). Especially Italy is in a curious position because southern Italy is securely related to the Mediterranean chronology while northern Italy is attached to the chronology of central Europe. As such it is stuck between the traditional ‘historical’ chronology of the Aegean and the adjusted absolute chronology of central Europe. The new chronology for central Europe is based on 14C (radiocarbon) and dendrochronological measurements. It has replaced the previous chronology based on stylistic sequences. Recent chronological research has resulted in several dissimilarities between the traditional Mediterranean chronology and the adjusted, absolute chronology of central Europe. This paper intends to add reference points for the transition of Late Bronze Age to Early Iron Age by presenting high quality dates from Italy and Carthage. These dates confirm that the new chronology of central Europe for the 9th and 8th centuries BC is also valid for the Mediterranean.
:download pdf:

In this paper a framework of description for pottery and textile manufacturing in Roman Asia Minor is presented. By mapping artisanal production in antiquity, its specific, but generally underestimated contribution to the ancient economy can be approached. The regulatory factors and production organization of both crafts are remarkably similar, and should be placed against the agricultural background of a pre-industrial society. In this way, interdisciplinary archaeological research may be a player of increasing importance in the chess game of the ancient economy.
:download pdf:

Carthago: Excavations of the University of Amsterdam in 2000 and 2001

This contribution deals with the first results of rescue excavations in the ancient city of Carthage, where the author directed an international team of the University of Amsterdam in 2000 and 2001. Main contribution of the excavation lies in a better understanding of Carthage’s topography during the 8th till the 5th centuries BC. A large industrial quarter with heavy presence of advanced iron working was found just south of a densely built residential quarter of this same period, excavated by the University of Hamburg. In between, a city wall can be postulated. It is suggested here that this wall can be identified with a double wall documented in the excavations of the German Archaeological Institute in the Rue Ibn Chab?at (casemate-wall). Carthage would, thus, have show a typical Levantine city model consisting of an Upper and a Lower Town separated by an industrial and market area.
:download pdf: 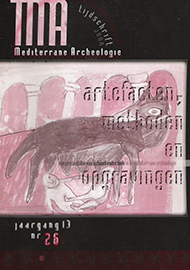