‘I came back with 300 Donkeys?’. New data on Egyptian expansion into the Western Desert during the Old Kingdom

The article aims at providing an overview of the current state of our knowledge regarding the Egyptian presence in the Western Desert during the Old Kingdom. A number of recent archaeological discoveries have contributed to a revision of previous ideas. The Egyptians came to the deserts in the Fourth Dynasty with the aim of discovering mineral wealth, and they seem to have left behind a lasting presence in the Dakleh Oasis, where gouvernors ruled over a group of Egyptian villages up to the end of the Sixth Dynasty. The Dakleh Oasis must have served as a base-camp in the long-distance trade with Nubia and unknown destinations in the west. The practicalities of donkey travel are also considered.
:download pdf:

The Hieroglyphs of Sennedjem. A Palaeographical Study of a Tomb at Deir el-Medina

The tomb of Sennedjem (TT 1) at Deir el-Medina is a splendid example of decorated private tombs of the necropolis workmen of the early Nineteenth Dynasty (ca. 1290-1240 BC). As such it has been selected as one of the sources for the research program on hieroglyphic palaeography by the French Archaeological Institute in Cairo (IFAO). Palaeographical analysis of inscriptions in the tomb chamber, concentrating on the exact form and the orientation of the signs, reveals many peculiarities of the hieroglyphic writing system and of its use by the painter who was responsible for the decoration of TT 1.
:download pdf:

The Reuse of Ancient Egyptian Temples in Late Antiquity. A Regional Study

Temple conversion is a commonly used term to denote the re-use of a temple as a church. This term fits well into the concept of a Christian ’triumph’ over paganism, which would have been achieved above all at the end of the fourth and the beginning of the fifth century AD. A study of several cases of re-use of temples in the Cataract region, including the temple island Philae, Elephantine and Syene (modern Aswan), indicates that this is a simplified picture of a more complex development. The temples in the Cataract area were only exceptionally re-used as churches; more often, economical and practical considerations were at stake. The examples show that the sacred landscape changed only gradually, but most dramatically in the sixth century, when new purposes were found for several temples which would have stood empty for a considerable time.
:download pdf:

Cleaning Debris in al-Qasr with Unexpected Consequences. Preliminary Results of an ‘Emergency Excavation’ in an Islamic Town in the Dakleh Oasis

During clearance activities in the connection with the restoration of an early 18th-century mud brick house in al-Qasr in the Dakleh Oasis (Western Desert) a considerable number of objects and documents have been found. The documents, a.o. dated letters and contracts, shed new light on the pre-modern history of this little Islamic town. Two soundings show at least two levels of occupation below the present one. The first level below the present one appears to show a different street pattern, The find of a Fatimid sandja at the lowest level in connection with mediaeval Arabic geographical data appears to attest the relative importance of al-Qasr in the eleventh century AD.
:download pdf:

Reflections on ancient glass from the Borowski Collection 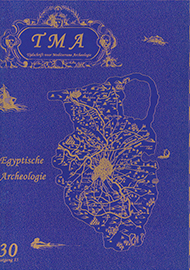