Salt production on the Tyrrhenian coast in Bronze Age Italy

In this article the author examines the Bronze Age salt production along the coast of Southern Lazio, in the area between Nettuno and Torre Astura. The excavation of site P13 has shed more light on salt production methods and their archaeological correlate in this region. The author treats this example site for salt production in the Bronze Age in more detail, and contextualises this by going into the geology and local sea level changes, the character of the archaeology along the coast, and the relation between coastal exploitation and the regional settlements pattern in the late Bronze Age.
:download pdf:

After large-scale excavations at Ostia in the first half of the 20th century (more specifically between 1938 and 1942) archaeologists who studied the paintings that were found, mainly focused on studying their stylistic features without considering the architectural context. Since the second half of the last century this research method has changed slightly and archaeologists started to take into account the architectural context of painted decorations. However, stylistic features still predominate in their proposed systems of wall painting in Ostia. Contrary to this method, the author of this article deals with the wall paintings in the Caseggiato del mitreo di Lucrezio Menandro (I iii 5) in Ostia and in particular with their architectural context. It appears that these wall paintings can be dated more accurately from their architectural context and that, in addition, social functions can be attributed to them.
:download pdf:

During the past few years, systematic field survey has revealed an important regional variation within Roman Italy. The settlement pattern that emerges in the Marche-region along the Central- Adriatic coast has many points of similarity with other regions of Italy, yet the precise details are unique. For example, the region was clearly wealthier than Molise, where there was a striking decline in the number of sites inhabited between the late Republic and the second century AD. On the other hand, comparisons with Latium or South Etruria may be inappropriate, given the superior markets available to those areas. Rural settlement in the Marche reaches a peak in the first century BC, when land allotments were made to army veterans, and in the first century AD. From the second century on, there is a gradual reduction in the number of sites in occupation, and absorption of smallholdings by the larger estates, although the small farms continued to surpass the number of large villas in late Roman times. Some late Roman villas were excavated in the northern area near Emilia-Romagna, influenced by the city of Ravenna, capital of the Western Roman Empire since the early fifth century.
:download pdf:

Social change and cultural interaction in the Middle Helladic Argolid: A new project based at the GIA

This paper presents the aims and methods of a new 5-year project, financed by the NWO and the University of Groningen, and based at the Groningen Institute of Archaeology. The aim of the project is to interpret the important social, political and cultural changes that took place in the southern Greek mainland during the Middle Helladic period and the transition to the Late Helladic, or Mycenaean period (approx. 2000 – 1500 BC). The task is undertaken by means of an integrated analysis of settlement, funerary, skeletal and iconographic data from the Argolid, northeastern Peloponnese. The central question of the project, the redefinition of personal, ethnic and cultural identities within wider processes of socio-political change, has a wider relevance beyond the Aegean and occupies a central position in current theoretical debates in archaeology.
:download pdf:

Malaria and Rome. A history of Malaria in ancient Italy / 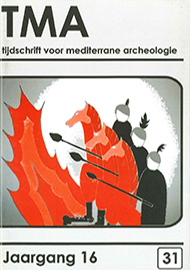