An outline of the debate on Romanisation in Italy

This opening contribution is meant as the editors’ introduction to the current TMA issue. First of all it states that all authors have been explicitly invited to contribute to this volume; the invitation was to participate in the most recent debate on the Romanisation of the Italic peninsula. Secondly, this contribution is intended to contextualize the other articles by providing an overview of the debate’s major themes and approaches. It is discussed how, in our post-colonial era, the original late 19th/early 20th century conceptualisation of Romanisation is heavily criticized for its colonialist overtones; accordingly, the notion is constantly being redefined, from specifically Roman-centred or native perspectives as well as from approaches aiming to highlight both frames of reference. On the other hand, most recently explicit post-colonial theory has been introduced to argue for abandoning the concept all together. All of these perspectives are represented in the present TMA issue.
:download pdf:

In this article we relate data on rural settlement development in the Pontine Region to the concept of romanisation, used as a label for “socio-cultural change that results from the confrontation of (proto)historical peoples with Roman power and an often dominant Roman culture.” (Slofstra 2002: 17) By looking at topographical, survey and environmental data from various land systems in the Pontine region, we illustrate how the romanisation of various areas was characterized by different rhythms and modes of change. For now, we discern between ’traditional’ and ‘colonised’ land systems. The Lepine foothills, the coastal zone and the Astura valley are examples of ’traditional’ land systems, where Archaic exploitation systems were modified after the installation of Roman colonies. The establishment of a centuriation pattern in the graben area may represent a true act of colonization. Further systematic surveys will have to show whether this model is valid for the whole Pontine region.
:download pdf:

The consequences of Roman occupation for the indigenous Italic communities are generally considered as very dramatic and are described in terms of ’the end of traditional culture and cultural identity’. This also applies in the case of the Lucanians, the indigenous community that lived in the modern region of Basilicata and the south of Campania. According to this point of view, the conquest of this area by the Romans led to the disappearance of Lucanian cultural customs and identity in favour of Roman ones. This article questions this supposed deterioration of the Lucanian identity as a result of the Roman occupation. For this purpose the sacred landscape, which is considered an important indicator of socio-cultural and ideological change, will be studied.
:download pdf:

Rome and Samnium: a dialogue

For too long the socio-cultural developments following Roman expansion in Central-Italy have been treated separately within mutually exclusive ‘monolithic’ discourses, c.q. ‘Romanocentric’ vs. ‘Italic’. In this contribution it is argued that an integration of both perspectives may offer a promising interpretative framework for the process that has conventionally been coined ‘romanisation’. This idea is exemplified by the outline of a ‘dialogue’ between Roman and Samnite cultural languages from the Samnite wars to the Social War. Both societies clearly celebrated a military ethos, and sanctuaries were central to both communities for the articulation of these values. On coins as well as in wall paintings, specific themes are re-iterated on both sides, but were adapted to serve local ends. It becomes clear that the Samnite and Roman worlds were by no means ‘closed’, but well aware of and in continuous dialogue with each other.
:download pdf:

An idea at the back of it? Romanisation as cultural-historical phenomenon

This article is a plea for a more coherent and thus cultural historical study of the process of romanisation. While the shift in perspective from Roman to native has been beneficial in giving the study of the Roman world a better balance, it should not become an end in itself. Many examples, most prominently the desire frequently seen in recent studies to abandon the term romanisation completely, suggest that this is however the case. In this essay four major objections are raised against this view. As an example of a potentially more coherent treatment the recent book by Shelley Hales on The Roman house and social identity is reviewed. Although this work does present a local and global perspective and indeed offers some stimulating hypotheses as to how people imagined and articulated their place in the Roman world, it unfortunately cannot be wholeheartedly recommended.
:download pdf:

This paper considers recent research on romanisation in the Mediterranean in the wider context of the current theoretical debate on this theme. It is argued that the notion of romanisation is rapidly losing currency, because ongoing theoretical developments in archaeology and the social sciences at large are radically transforming the underlying concepts of culture and culture contact. Touching on a number of case studies from central Italy, Sardinia and eastern Spain, it is proposed that the term romanisation should be abandoned and subsumed in the more-encompassing studies of Roman colonialism or imperialism.
:download pdf:

Rome and the others

The article “Rome and the Others” is the reaction of a non-Mediterranean archaeologist to the other contributions about Romanisation in this issue. Unfortunately, the contribution by Peter van Dommelen could not be incorporated into this reaction. Various themes from these articles are situated within the debate about Romanisation that has been raging in the discipline of Roman archaeology since 1980. In this discussion critical attention is given to the post-colonial position within this debate.
:download pdf: 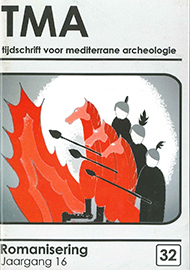