In the last 15 years scientific as well as more popular literature have been overloaded with the term gender. In the archaeological field, too, this term has been introduced and quickly became the subject of many theoretical examinations. Unfortunately it should be remarked that the use of the term gender is restricted to prehistoric archaeology and that the term has been neglected in later periods. A possible reason for this could be that in the classical and later periods we have material as well as written sources to reconstruct past societies. If gender archaeology wants to develop, then it should first come to the construction of a methodological procedure to analyse gender. It is logical that the methodological procedure will be different according to the historical period, culture and the different aspects of life in which it will find its application.
:download pdf:

This article presents a new 5-year research project of the Groningen lnstitute of Archaeology, funded by an NWO VIDl grant. The project aims to study the structural biases that have resulted from more than one century of archaeological research into the Mediterranean landscape, and to explore ways in which the effects of these biases may be corrected. In particular, the project will look at long-term geological processes, modem agricultural processes, and the neglect, by archaeologists, of the archaeology of the non-classical, rural, and ‘marginal’ – i.e., difficult to investigate – landscapes. Since new approaches will have to be developed for this, the project will have a strongly methodological flavour, with experimentation in such areas as site detection techniques, simulation of slope processes, and the classification of both the landscape and the surface finds assemblages that are commonly found in it.
:download pdf:

Funerary remains and burial rituals are generally attributed important roles in explanatory models concerning regional developments and Hellenisation in Salento, Southern Italy. The interpretations are however strongly hypothetical, because of the fragmented nature of the evidence and the absence of systematic analyses. Therefore, with integrally excavated and documented necropoleis as a point of departure, these hypotheses need to be tested and refined. This article presents the results of a thorough and systematic analysis of the burials of an indigenous settlement, Muro Tenente, following the methodological framework put forward by Ian Morris in his ‘Death-Ritual and Social Structure in Classical Antiquity’ (Morris 1992). Drawing conclusions on the structuring principles in the expression of social relations it hopes to offer some new perspectives concerning the debate on social-political dynamics in the area.
:download pdf:

This paper offers a case study of a terracotta votive statuette from the sanctuary of Athena on the hill Timpone della Motta near the modern day village Francavilla Marittima in Southern-Italy. It concerns a Corinthian kourotrophos/kanephoros dating from the late seventh century BC. Observations on the technology, style, iconography and the iconography of the clothing indicate that the statuette belongs to the context of a so-called ‘Frauenfest’, a festival for women and children. A similar festival may have taken place in the sanctuary of Athena in Francavilla Marittima. Although most likely a Corinthian import piece, it is argued that the terracotta statuette may be regarded as more than an arbitrary dedication in the sanctuary.
:download pdf: 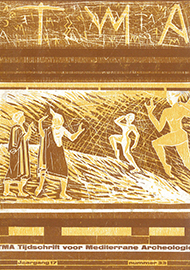