Galli of the great Mother

This article discusses the image of galli in antiquity. Galli were eunuch devotees of the eastern goddesses Cybele and Atargatis who dressed and behaved like women. It is extremely difficult to reconstruct any clear picture of these transsexuals, for all testimonies were written by outsiders. After a discussion of the picture of the galli in Roman literature, several sculptures and anthropological data are discussed in order to assess how far this picture reflects the real life character of the galli. Although there seem to be an element of truth in the Roman sources, there can be no doubt that they are governed by certain prejudices. In the last paragraph it is argued that these prejudices largely result from the ecstatic character of the cults of Cybele and Atargatis. Furthermore, the fact that galli voluntarily deprived themselves of their active sexual role contrast sharply with the Roman conception of sexuality and male dominance.
:download pdf:

Chaste matrona or voluptuous Venus? Portrait-statues of Roman women in the western part of the Roman Empire

This opening contribution is meant as the editors’ introduction to the current TMA issue. It focuses, first, on the state of the art of gender studies in general, and, next, of archaeology in particular. It is shown that the Anglo-Saxon world is the main carrier of this approach of studying the differences of men and women in Antiquity, in strong contrast with the archaeological lines of inquiry in the Dutch academic world. It briefly discusses the theoretical framework and meaning of several statements. It gives an overview of the most important publications in the field and notes a huge increase of publications. As the guest editor, the author notes that the contributing authors have been invited to contribute to this volume taking imagery as a starting point of their approaches. This contribution tries to contextualize the other contributions by discussing the importance of using imagery in the reconstruction of female power, in deconstructing the exemplary role of the Etruscan elite woman. Furthermore, it notices that in the archaic world female power is most apparent in religious contexts and mother cults, expressing male political rule at the same time. Quite unexpectedly, all contributors focus on the same issue, showing the invisible female religious world of the lower classes and the power of the female divinities over their male priests, rulers and followers.
:download pdf:

In archaeology, the ordinary often remains out of sight. Examples of this are daily life, especially of women, and the more common rituals at sanctuaries. In this article, precisely the combination of those is explored. Pottery found in smaller sanctuaries suggest that votive offering was an important part of ‘ordinary’ religion — if one assumes, as argued here, that most large assemblages of decorated pottery found at sanctuaries represent votives, and not pots used in libation or drinking feasts. The fact that most of these large assemblages of presumably votive pottery occur in small sanctuaries of goddesses, often Demeter, and bear no inscriptions, suggests that they belong to the female sphere. Exceptions, like the pottery from the Athenian Akropolis or Gravisca and Naukratis, which show a strong male presence, seem to prove the rule.
:download pdf:

The reign of soldier emperor Gallienus witnessed the emission of a remarkable series of aurei that probably constitute one of the most curious coin series in Roman numismatic history. On these coins, the traditional portrait of the emperor has been merged with the feminine facial features and the significant attributes of a particular goddess – probably Demeter. The portrait, moreover, is accompanied by an unusual legend that seems to address the emperor explicitly as a woman. This article proposes a critical interpretation of this display of imperial drag, both in the context of Gallienus’ representational politics and with regard to the Roman understanding of gender and sexuality. Since traditional archaeological and historical discourse fails to problematize imperial authority as a specific instantiation of masculine power, I will try critically to correlate the seemingly ambiguous portrayal of Gallienus as a ‘bearded lady’ to the question of the gendered character of the Roman imperial portrait per se.
:download pdf:

Housing in New Halos. A Hellenistic Town in Thessaly, Greece 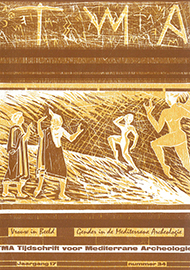