Geoarchaeology and landscape classification in central and southern Italy

This article reports on a new system for landscape classification being developed by the authors, that is largely based on physical geographical criteria, and is especially intended for use in conjunction with field walking surveys as a part of landscape archaeological projects. The need for a landscape classification system, the reasons for rejecting various alternative systems, as well as the criteria for the new multiscalar classifications, are explained. By way of example, the classes resulting from a landscape mapping at two scales – 1 in 25,000 and 1 in 10,000 – are described using one of the authors’ fieldwork areas in southern Italy. This research is one aspect of wider geoarchaeological studies being conducted from 2005 to 2009 by the Hidden Landscapes project at the Groningen Institute of Archaeology.
:download pdf:

A geomorphological map is the clearest way to represent the interaction processes between physical geospheres and man, and the results of this interaction, including the consequences of human impact. Consequently, creating a geomorphological map is an indispensable step in all projects in the field of geoarchaeology or landscape archaeology. In the Potenza Valley Survey project, the method was well suited to the first objective: to study the interaction between landscape dynamics and settlements in the period 1,000 BC – AD 1,000. Moreover, it constitutes an important presentation and communication means between the archaeologist and the geomorphologist. The geomorphological map has been incorporated in derived studies, such as a land evaluation, and it was applied in testing the erosion map. These features are illustrated with the case study of Ricina, an abandoned Roman town near the Potenza river, 20 kilometers away inland.
:download pdf:

Archaeology in an extremely dynamic environment: the Zakynthos Archaeology Project

In the summer of 2006, the Netherlands Institute in Athens has started archaeological research on the island of Zakynthos, Greece. In comparison with neighboring islands, the archaeology of Zakynthos is relatively unknown. To a large extent, this is due to the extreme dynamics of the landscape on the island. Very intensive methods of agriculture have been practiced on the island for several centuries, continuing up to the present day. Development for tourism is progressing at a fast pace. In addition, Zakynthos is situated in an area that is highly tectonic. The frequency of destructive earthquakes has had an, as yet, unknown effect on the formation of the landscape and its archaeological record. Within the Zakynthos Archaeology Project the methods by which artifacts are collected from the surface have been adapted to the very thin distribution of finds and their fragmentation. Also, remote sensing techniques are employed in order to have increased access to landscapes that are now hidden underneath thick vegetation and to identify archaeological phenomena underground. An integrated study in which palaeoseismologic data are combined with results from the archaeological survey will give more insight in the role of earthquakes with regard to the formation of archaeological sites.
:download pdf:

A geoarchaeological investigation of an historical gold mining site in northeast Alentejo, Portugal

This paper presents the results of geoarchaeological research in the northeastern Alentejo region of Portugal. The study area is a historical mining site for alluvial gold on the left bank of the Tagus River. As the gold exploitation obliterated large parts of the original landscape, a geoarchaeological approach is vital to gain an insight into the complex landscape history. Fieldwork forms the basis of this research. Further information was gained from aerial photograph interpretation, ancient literary sources and information from the well-studied Roman gold mines in north-west Spain. The archaeological framework is formed by an overview of historical alluvial gold mining in the Iberian Peninsula and a discussion of Roman techniques for large-scale exploitation of gold-bearing deposits. The geological and geomorphological framework consists of a description of the characteristics of the landscape before the exploitation. Within this interdisciplinary framework, the preserved remnants of the gold exploitation are identified and subsequently interpreted as to their function in the exploitation process.
:download pdf:

Nikopolis, Epirus, Greece. A reconstruction of a Roman landscape on the basis of geomorphical and geophysical investigation

In the summer of 2006 geoarchaeological fieldwork was conducted in the valley north of the ancient Roman city of Nikopolis (Epirus, Greece). Different geomorphological and geophysical techniques were used to determine the appearance of the landscape around the city in Roman times. A number of geomorphological techniques were used: first of all, detailed analysis of different land forms apparent at the surface and hand augering of these land forms. The sediments taken from the cores were analysed for geological composition and anthropological indicators. A selected number of samples were taken for grain size and thermogravimetric analyses. Furthermore, geophysical prospection (magnetometric and resistivity surveys) was performed in some key areas. The geomorphological study has revealed that the valley is bound by two faults, one to the south and a large one to the north. From the northern fault two alluvial fans enter the valley. Furthermore, the valley is subject to a complex combination of alluvial, colluvial and marine sedimentation, erosion, tectonic uplift, sea level variations and anthropogenic activities. The geophysical data, finally, show a Roman landscape that had a symbolic layout. A Roman road connecting the monument of Augustus with the main city gate, an aqueduct parallel to it, a bath house along the road and a theater and stadium nearby showed that Nikopolis was a city of great importance.
:download pdf:

The aim of the geoarchaeological study presented here was to use different research methods (the study of historical maps, aerial photography, geomorphologic survey, field walking, geophysical survey and test excavations) to investigate the relationship between the Roman town of Mariana (Northeast Corsica) and the river Golo. Whereas it was difficult to find clear indications for the location of the remains of Mariana in historical maps and written sources, the analysis of aerial photographs offered interesting clues to the town’s defences. Magnetic survey (using a fluxgate gradiometer) provided detail concerning the orientation of the settlement structures, which is in agreement with the excavated southern part of the town (near the medieval Canonica church). It also detected a possible industrial zone with iron slag and a presumed kiln complex. Dating evidence from a test trench over an opus testaceum wall suggests occupation from the early to late Roman Empire. The area investigated provided little evidence for medieval occupation (unlike the Canonica area). At this stage little information is available on the street system. Only one east-west road alignment is visible in the magnetic plot. The location of the forum in the northern part of the survey zone, where a remarkable absence of archaeological traces was observed, also remains uncertain. The town’s history is closely linked to the river Golo. Mariana was built on a river terrace, and some of the 1st century structures were even erected in the old river bed. It suffered from inundations in Roman antiquity and more frequently from the 6th century onwards, because colluvium carried by the river gradually raised its bed. In the 12th century, the Golo reached the southern quarters of the town and caused destruction. Today the old bed has been completely filled in by the river deposits, and the river has moved a few hundred meters to the south.
:download pdf:

The Medici Conspiracy: the illicit journey of looted antiquities, from Italy’s tomb raiders to the world’s greatest museums 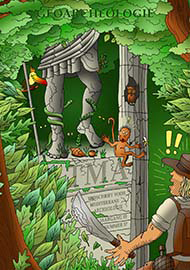