The influence of Minoan palaces on Minoan ritual practices

Several scholars think that Minoan palaces stood in close connection with religious practices and perhaps even exercised power over and through ritual. This article explores how scholars in the past have thought about power and religious practices in Minoan Crete. In addition the influence of Minoan palaces on three different types of shrines (Lustral Basins, Pillar Crypts and Domestic Sanctuaries) is explored. We compare and investigate the architecture, assemblages and distribution of the shrines. The research shows that not palaces but groups of notables in general ‘used’ the shrines and religious practices.
:download pdf:

A votive assemblage with terracotta statuettes from temple Vd in Francavilla Marittima, Calabria, Italy. Evidence of a kosmèsis ritual?

Terracotta votives from the seventh century BC are often difficult to interpret as a representation of either a goddess or a dedicant, because of an absence of unambiguous attributes. The interpretation of these terracottas might gain from their primary archaeological context, which is often unknown due to secondary burial in the deposits in antiquity and/or the method of excavation, a lack in documentation or destruction by clandestine diggers. In Temple Vd on the Timpone della Motta near Francavilla Marittima in Calabria at least one assemblage with terracotta figurines and other objects, dating from the middle of the seventh century BC, was found in situ. This paper first presents the data of the archaeological context – the assemblage – and second the iconographical analysis of the terracottas. Subsequently these data are related to each other in order to arrive at an interpretation of the assemblage as a whole and of the terracottas within it. It is argued that the assemblage might be a remnant of a kosm?sis ritual, a ritual concerning the purification and dressing or adorning of a cult statue and/or of the participants to the ritual. The purpose of the paper is to demonstrate the value of archaeological context for the interpretation of terracottas from the seventh century BC.
:download pdf:

From city wall to symbol: Messapian fortifications from a societal perspective

The primary function of a fortification is to defend the city or settlement within its circuits. The Messapian fortification however seems to lack the technical features that were required to defend it properly. It suggests that defence was not the only function of these walls. Drastic social transformations in the Messapian society of the fourth century BC seem to emphasise that its functions were also on the economic and social-political levels. These two functions actually point to another function that has its origin in the social sciences: the symbolic function. By applying anthropological theory to the archaeological evidence, the Messapian fortification becomes a symbol for a shared past and a new territorial order, instigated by the local elite as a strategy to ensure a independent future.
:download pdf:

In this article, an explanatory model will be presented that will help explain developments in the number and distribution of cult places in Latium during the Late Republic, with a particular focus on monumental sanctuaries. Based on certain characteristics of votive material during this period and its supposed effect on cult places, it will be argued, following up on prior research, that it could be enlightening to describe the functioning of religion in economic terms, namely as a competitive market model with suppliers and consumers. Next, we will see how the monumental late republican sanctuaries of Latium fit in this model. It will be suggested that monumentalisation is a visible result of the successful functioning of sanctuaries within this competitive religious system. One of the main advantages of the model is its non-exclusive nature, being perfectly compatible with such notions as aristocratic prestige and competition. It will be highly interesting to interpret architectural developments of these monuments, in the light of the market model, as ways to actively improve their market position.
:download pdf:

Making, moving and managing. The New World of ancient economies, 323-31 BC 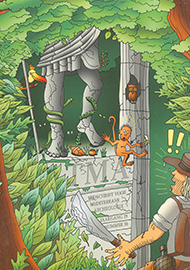