The Amazon in Central Italy: Symbol of a New Era

Around the end of the 6th century B.C. a remarkable development occurs in the decoration of terracotta temple roofs. Besides a clear monumentalisation of the sanctuaries, the decorative themes of the roofs change dramatically. The former ‘aristocratic’ scenes are abandoned in favour of depictions of mythological battles. The Amazon was one of the most popular themes at the beginning of the 5th century B.C., appearing on more than ten different temple roofs throughout Etruria and Latium Vetus. The reason for her sudden popularity must be prompted by the turbulent political atmosphere, connected with the transition from the Regal Period to the Roman Republic.
:download pdf:

The early Christian Catacombs of Malta and Sicily: how Early, how Christian?

Although often ignored in the study of catacombs, there are more regions than just Rome which have Early Christian burial places. This study wants to show how these different catacombs fit into the development of Christianity in Late Antiquity. The iconography of these catacombs illuminates the lives of people who differed a lot from each other both within a region and from region to region, on a cultural as well as a religious level. The catacombs clearly point to a situation of relative harmony between Christians, Jews and pagans in this period.
:download pdf:

Between West and East: the self representation of Mark Antony

To donate portrait statues in honour of Roman aristocrats was an important part of political life in the city of Rome during the last decades before the end of the 1st century BC. Statues were bestowed upon aristocratic individuals to honour their deeds and achievements, therefore being an important element in the self advertisement of aspiring politicians. Mark Antony was such an individual. A few sculpted portraits have been identified as Mark Antony, largely by comparison with his portraits preserved on coins. Three main themes can be identified: an association with Alexander the Great, Hercules and Dionysos. These associations can be linked with Antony’s political aspirations and in the case of Hercules, physical appearance. Furthermore Antony’s portraits show, depending on the characteristics of their context, traditional Roman and newly introduced Hellenistic portrait styles. In this Antony’s portraits are not unique but rather the products of their time, going back to a long tradition of Roman officials being honoured similarly.
:download pdf:

The second century AD: a “forgotten” period in the archaeology of Roman Galilee

Roman Galilee’s importance in Christian and Jewish history has caused a focus on two periods, the Early and Late Roman period. The period in between, the second century AD, has largely been neglected. Considering the archaeological excavations of the last 40 years however, the second century seems to have been a period of cultural integration with the Roman Mediterranean world. In this article, I will discuss this period, therefore, as a transitional period in Galilee’s Roman history. It changes from being a somewhat marginal region in the Early Roman period to a dynamic one in the Late Roman period when Roman, Jewish and Christian cultures become heavily intertwined.
:download pdf:

This paper presents the results of geoarchaeological research in the north-eastern Alentejo region of Portugal. The study focuses on the exploitation of granite in the territory of the Roman town of Ammaia. Until recently, the town and its hinterland were poorly studied, notwithstanding the high level of preservation. Through a non-destructive survey approach by an interdisciplinary team of archaeologists, geomorphologists and geologists, the three main granite quarries in the Civitas Ammaiensis were identified and investigated. The geomorphological component of the research consisted in locating possible quarries. Subsequently, the archaeologists examined the cutting marks and estimated the age of the quarrying activities. Finally, the geological contribution involved the comparison of the granite types in the quarries with those used in the town’s constructions. This research provided a clearer insight in the economic and spatial organization of the Civitas Ammaiensis and in the stone exploitation techniques.
:download pdf: 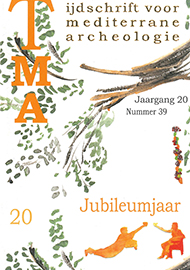