One of the many intriguing questions on the Greek colonization of the northern coasts of the Black Sea concerns the socio-economic relationships that developed during the Hellenistic period between incoming groups of colonists and the indigenous peoples in the steppe. However, to investigate these relationships, detailed knowledge of both the Greek and the indigenous settlement pattern is imperative. To this end the Dzargulhach Survey Project (DSP) was formulated, a ‘Mediterranean style’ landscape archaeological project designed to reveal even the smallest activity locus in a landscape known to have been the object of Greek colonial interest. The landscape central to this project is the hinterland of the colonial coastal settlement of Panskoe in the northwestern Crimea (Ukraine), which inHellenistic times was part of the `distant’ chora of the Greek colony of Chersonesos. The fieldwork for this project is carried out byDanish,Dutch, German, Russian and Ukrainian researchers specialized in intensive survey, physical geography, geophysical prospection and excavation. In this paper the preliminary results of two campaigns are presented in light of current thinking on Greek colonization in the northwestern Crimea. The DSP is a collaborative project of the Centre for Black Sea Studies (CBSS) at Aarhus University (Danmark), the Groningen Institute of Archaeology (GIA) (Netherlands) and the Crimean branch of the Institute of Archaeology (NASU) (Ukraine). The project directors are dr. Pia Guldager Bilde of Aarhus University and director of the CBSS and prof. dr. P.A.J. Attema of the GIA. Currently the publication of the 2007 and 2008 campaigns is being prepared by the project team for publication as a monograph in the series Black Sea Studies of CBSS (Aarhus University Press).
:download pdf:

Classical archaeology has always played an important role in substantiating western society’s claim to being the keeper of the Graeco-Roman heritage. In recent decades, such claims have been vigorously challenged. Not only have classical scholars themselves deconstructed the idea that western society is rooted inGraeco-Roman civilization, but national and local communities in Greece, Italy and elsewhere have been increasingly claiming Graeco-Roman material culture as their legitimate heritage. In this paper, the author proposes some possible responses to these challenges, focusing on research and heritage perspectives of the Salento Istmus Project of the Vrije Universiteit of Amsterdam. First, he discusses the recent field work at the site of L’Amastuola, which questions traditional perspectives on Greek colonisation and demonstrates the heterogeneity of the ancient local community. Second, with regard to heritage issues it is argued that modern classical archaeologists still have much to contribute, for example by conducting fieldwork and by providing the results to the relevant authorities, while also engaging local communities. This is illustrated by focusing on the authors’involvement in an EU-funded project geared towards setting up archaeological parks on the Salento Istmus.
:download pdf:

Classical archaeology has for a long time been considered a self-contained and conservative discipline. However, the discipline is undergoing a dramatic transformation, as practitioners adopt new interpretive approaches and innovative methods of analysis, inspired by developments in the neighbouring fields of prehistoric archaeology and ancient history. These changes in practice and orientation do not really constitute a unified phenomenon. Rather, different academic traditions are developing, diverging approaches are adopted, and even competing definitions of classical (or Mediterranean?) archaeology are used alongside each other. Archaeology has not only changed; it has also become a diversified, growing and vibrant field. This paper will attempt to outline some of the theoretical and methodological changes that have taken place in classical archaeology in the last forty years or so. Although the emphasis will be on Greek archaeology, developments in all areas of the Mediterranean and examples from different periods will be brought into the discussion.
:download pdf:

This article will present some of the significant trends in archaeological scholarship focussing on the Mediterranean over the Longue Durée. Firstly, Environmental and Physical Science continue to exercise a not to be underestimated impact on our understanding of cultural changes, as well as offering often unexpected evidence causing us to rethink our scenarios of the past. In Prehistory, popular themes such asWorld Systems and the phenomenology of landscape can be balanced against the ongoing insights from anthropological approaches, e.g. in demography and social structure. For Greco-Roman antiquity, the role of regional survey remains central to issues of human impact, population fluctuations, and the political organisation of town and country. Refinements in ceramic studies and aspects of ancient technology have brought challenging evidence against Finley’s long-popular model of ancient stagnation. The study of ancient mentalities through works of art has been given new impetus and is brought into the mainstream of current interest in Hellenisation, Romanisation and Christianisation, through the more sociological and ideological approaches pioneered by Zanker and his school. In Medieval and Post-Medieval archaeology, approaches developed in North-West Europe and the States have been spreading throughout the region, notably in the combination of textual sources and field excavation or survey of deserted post-Roman rural settlement sites. The interface with ethnoarchaeology brings such recent archaeology into contact with existing societies and living memory, and here the archaeology of capitalism and globalisation is a significant theme. Finally a revival of synthetic or multiregional studies is to be welcomed (e.g. ‘The Corrupting Sea’), trying to make sense of the vast new bodies of evidence which have become available in the last 25 years.
:download pdf:

On holiday? Dutch archaeological research in the Mediterranean world

This paper gives an overview of research in the Mediterranean by Dutch archaeologists in the period since the TMA began. A shift can be traced away from office-based archaeology and the art history of Greek and Roman culture and towards large large fieldwork projects. The Dutch have made name in regional projects in which, sometimes over several decades, teams have returned to the same area to develop different types of field work (survey, excavation, cultural heritage). Greece and Italy were and are the main countries in which Dutch archaeologists are active. Attention is still directed to the Greeks and Roman themselves, but the scope of interest has also widened to include indigenous groups and their attitudes towards colonists and invaders. At the same times, there are also scholars working in museum archaeology (especially Amsterdam) and studying monuments previously excavated at sites such as Rome and Pompeii. The author observes, to his regret, a certain decrease in the variety of research methods and programmes, so that regional studies seem ubiquitous.
:download pdf: 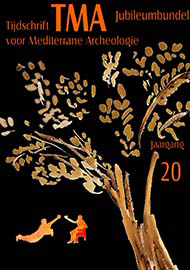