The excavations of Heinrich Schliemann (1822-1890) at Hisarlýk in the second half of the 19th century are definitely among the most imposing archaeological activities that took place in the Ottoman territories.Hence, there has been a great deal of valuable historical research into Schliemann’s archaeological activities in the Troad.Most research, however, relies largely on western sources. This is typical for the historiography of archaeology in the Ottoman Empire, in which hardly any attention has been paid to the archaeological concerns and interests of the Ottomans themselves. The primary goal of this article is to provide more insight into the Ottoman attitude towardsHeinrich Schliemann’s first campaign of excavations from 1870 to 1874 and the illegal transportation of Priam’s Treasure, through analyzing Ottoman official correspondence.
:download pdf:

The New Acropolis Museum: a biography

After three decades a politically charged and technically complex project is finally nearing completion in Athens, Greece. The New AcropolisMuseum, based approximately 280 meters from the Parthenon at the foot of de Acropolis is expected to be completely accessible for the public in the summer of 2009. This museum isn’t only a main attraction in Athens, but also the scene of a possible return of the Parthenon marbles from the BritishMuseum. The goal of this article is to give a short biography of the New Acropolis Museum. It’s history, controversies and the role of the return of the Parthenon marbles will be discussed.
:download pdf:

From Marble Mania to decoration. The presentation of antiquities in England 1600-1800

One of the first collections of antiquities in England was gathered by Lord Arundel in the early 17th century. He collected objects from all over Europe but especially from Italy.His collection grew quickly and with it the way it was displayed. By following the whereabouts of (parts of ) the collection in different private collections, an overview of the display of antiquities can be made throughout two centuries in Europe. The influence of travel, fellow collectors and architects shows a change from scolarly display to decorating fantasies in an architectural context.
:download pdf:

Rediscovered heritage, the plaster cast collection of the National Museum of Antiquities in Leiden, 1818 – 2008

In 2008 theNationalMuseum of Antiquities (NMA) made an exhibition titled ‘Beautiful Splendor, masterpieces in plaster’. For the first time in circa 30 years the public was able to see part of the collection of plaster casts from the NMA. The casts have long played an important role in the museum, being used for archaeology classes, but also to educate the general public in the taste for the antique. After the heyday of casting in the 19th century, slowly but surely from the beginning of the 20th century casts were removed from museums all over Europe, as the real object became more important for museums. The casts were seen as unimportant relics of an outdated way of exhibiting the classical past. The NationalMuseum of Antiquities was somewhat late in following this trend, but in the 1960’s the last casts still on show were put into storage, where they stayed for almost 30 years. These days the museum no longer sees the casts as a burden, but as an important part of the collection and has decided to add a new collection area: the reception of antiquity.
:download pdf:

An enterprising Maecenas. The donation of a teaching collection from Cyprus by Johanna Goekoop-de Jongh to the Archaeological Institute of Utrecht University

In 1938 doctor Goekoop-De Jongh, whose archaeological patronage also included excavations in Greece and Italy in the 1930’s, donated a typical collection of Cypriot pottery to the university where she had taught art history from1904 to 1905. She recognized the great value of inspiring academic education and had experienced the importance of contact with authentic objects during her training as a classical archaeologist. Her journey to Cyprus, archaeologically in strong international interest during the previous years, resulted in the highly appreciated gift and an accompanying series of lectures by a pre-eminent scholar in the field. Nowadays, the collection is dispersed among the university museums of Utrecht and Amsterdam where it can still be used for its intended purpose and testifies to the history of teaching and research.
:download pdf:

The secret of the sherd collection Van Hoorn. Research into the archaeological collection of the Universiteitsmuseum Utrecht

The depot of the Universiteitsmuseum Utrecht contains an archaeological collection which was once part of the department of archaeology of theUniversity ofUtrecht, before its abolition in 1983. The collection was eventuaelly transferred to the museum. Part of this collection is the sherd collection Van Hoorn. It was believed by the museum staff that this collection, with an emphasis on Greek culture, was assembled by lecturer Gerard van Hoorn himself. However, during the research it became clear that only a part of the collection was added during the lectureship of Van Hoorn and that he himself donated only one piece. This means that the name of the collection doesn’t cover the contents. This article describes the way in which a study collection was built up, a common practice in museums and universities in the beginning of the twentieth century.
:download pdf:

The Allard Pierson Museum during the Second World War

Before the war, the Allard PiersonMuseum had started out as a study collection for employees and students of the University of Amsterdam. Later on the museum also opened her doors to the general public. The collection consisted mostly of Mediterranean artefacts witch where collected by Prof. Dr. Scheurleer and Dr. Six. During the was public access to the museum was restricted due to the absence of the main part of the collection, which was moved into safe storage into the Dutch dunes.Much of the acquisition activities were slowed down and work was restricted to taking care of the objects. However, a few remarkable acquisitions were made during these years and the museum even served to prevent an important private collection to be shipped to Nazi Germany.
:download pdf:

The lost temples of Caere and Caprifico. Conflicting interests concerning the return of looted antiquities

This article tries to unravel the complexity of the position of the independent archaeologist in the politics of publishing looted antiquities. During the process of publishing material belonging to Archaic temple roofs in Caere (Etruria) and Caprifico (Latium) in the last ten years, the author was forced into an uncomfortable position between the Italian authorities and European museums that had been asked to return the stolen properties to Italy. While a solution to the problem still seems out of reach concerning the collection of Caeretan architectural terracottas held in custody by the Ny Carlsberg Glyptotek in Copenhagen, fragments of a demolished roof from Caprifico, once forming part of collections of both the Ashmolean Museum in Oxford and the Antikenmuseum in Basel, found their way back to their original homeland in Cori (Latium). The author stresses that publication of looted material should not be blocked by laws and opinions formulated in the battle for the return of the archeological objects. Instead, publication should be the ultimate goal in the archaeological world and European heritage politics. A new international policy regarding the repatriation of archaeological heritage is desired, not in the least by many Italian academics. Such a policy should emphasize an atmosphere of respectful negotiation between the different participants. In the view of the author, it is a European responsibility to provide the opportunity for specialists to continue publishing illegally acquired archaeological objects without the restrictions of the current political situations and controversies.
:download pdf:

Testing the hinterland. The work of the Boeotia survey (1989-1991) in the southern approaches to the city of Thespiae

Keros, Dhakalio Kavos: the investigations of 1987-88 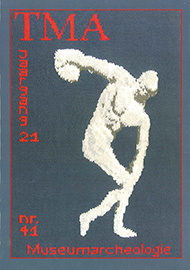