Archaeology and the Roman Economy

Introduction to this issue’s theme and articles.
:download pdf:

Pompeian standard of living. A positive assessment from bronze and iron consumption data

Modern society is fascinated by the luxury of the Romans. But has the wealth of the few been unjustly equated with society as a whole? What was the standard of living for the average Roman citizen? Questions about standard of living are not new – but calculating GDP and per capita incomes leaves much to be desired. It is argued that archaeological artefacts can be utilised to determine the relative wealth of the people who consumed them. To see if luxury goods, in this case those made out of bronze (copper alloys) and iron, made their way to the masses, household floor assemblages from six houses in the Insula of Menander at Pompeii are analysed. People from different socio-economic levels of society are represented as each house varies in size – from 25m2 to 1,830m2. Results suggest that there were people with modest means who lived above subsistence.
:download pdf:

This paper focuses on the potential contribution of wine and olive oil production in the agrarian economy of Adriatic central Italy between the Late Republic and the Early Empire. The study area assessed in this paper includes the Marche and northern Abruzzo. The author discusses the available archaeological evidence in the countryside related to the manufacture of wine and olive oil. The archaeological contexts have been classified according to their archaeological visibility and preliminary geographic and chronological patterns are presented. The processes of vinification and oil-extraction are then discussed through an analysis of the best documented pressing facilities.
:download pdf:

Counting sherds. A study of site-complexity and site-evolution in the hinterland of Antium (Lazio, Central-Italy)

As part of the author’s dissertation, intensive surface surveys were carried out in the municipality of Nettuno (Lazio, Central Italy). These saw the total sampling of four sites that were previously identified during the (regular) surveys carried out within the framework of the Carta archeologica del comune di Nettuno-project (2004-2006) of the Groningen Institute of Archaeology. On these sites, the use of a small-grained grid system (4x 4 metres) allowed a more accurate study of intra-site chronological and functional evolution. The study as a whole widens the interpretational possibilities for sites in our inventory and provides valuable information on processes disturbing the original morphology of sites. In this article the author discusses the results for two of the studied sites.
:download pdf:

The construction of public buildings in Roman Italy, 225 B.C. – A.D. 425. A conjectural approach

Socioeconomic archaeologists and historians are often interested in the reconstruction of conjectures of past production and consumption, as such conjectures may provide us with better insights into the structure, scale and nature of the ancient economy and inform us about levels of prosperity. In this article the author has teamed up with this school of thought, and has constructed a conjecture of public constructions in Roman Italy for the period between 225 BC and AD 425. The reconstruction of this conjecture was essentially achieved by placing many (dated) occurrences of public constructions from a large dataset by Hélène Jouffroy (Jouffroy 1986) in a chronological order. Because of some methodological improvements such a thing could be done with far greater precision and much more data than in past assessments of the data by, amongst others, Hélène Jouffroy and Richard Duncan Jones (Duncan Jones 1974;1990). In addition the author discusses and counters various possible biases in both the data and his method and presents the reader with some interpretative concepts, most notably ’the temporality of consumption’. Though a conjectural approach from its outset is economic, the author interprets his results not solely from an economic perspective but firstly from within the socio-cultural and political context of euergetism. In his article Frits Heinrich shows that the number of new public constructions in Italy reached its zenith during Augustus’ reign, while the enjoyment of the services public buildings offered may have been greatest during the reign of Antoninus Pius. He furthermore shows, as far as public constructions are concerned, that that which is usually referred to as the ’third century crisis’ seems to commence as early as the second half of the second century A.D.
:download pdf: 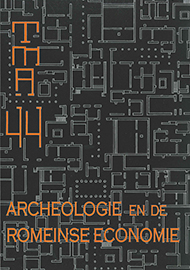