The rise of the terramare culture? A critical reconsideration of the Middle Bronze Age colonisation of the Po Plain

During the Middle and Recent Bronze Age (1650-1150 BC), the Central Po Plain (Northern Italy) was characterised by the presence of several large, banked and moated villages. Traditionally it has been argued in the Italian scholarly literature that these so-called terramare settlements were established during a ‘colonisation’ of the plain. Postmodern criticism and new data, however, question this part of the so-called ‘rise, florescence and fall’ grand narrative of the terramare culture. This article addresses several of the problems inherent to this theory such as its historiography, the supposed representativity of actually known Early and Middle Bronze Age sites, and the ‘group identity’ and facies issues. A reconsideration of its epistemological premises is pursued in an attempt to open the door for an eventual alternative explanation of this phenomenon.
:download pdf:

Neopalatial Crete: a reconstruction of a competitive geopolitical landscape

Geopolitical organisation of Neopalatial Crete (1640-1425 BC) is traditionally associated with the palaces. Within this perspective, the palace of Knossos is postulated as the political centre of Neopalatial Crete. However this centralisation of power in the palaces is being questioned because of the widespread attestation of monumental architecture and valueable material culture. Here an attempt to break out of this polarisation is presented based on a thorough analysis of the archaeological record of two regions, north-central and south-central Crete. The archaeological record points strongly to a competitive geopolitical environment, where power was constantly being negotiated between elite groups. The chronical trajectories of the studied settlements indicate fluctuating power structures. Certain settlements expand while others are abandoned or outcompeted. Consequently the Neopalatial period cannot be considered as one monolithic entity. Considerable changes took place during this period, notably within the socio-political sphere. As a result, permanent political dominance of Knossos proves out te be very improbable.
:download pdf:

Sabines in the Tibervalley: Iron Age communities between clans from the Apennines and Tyrrhenian city-states

The most important phenomenon in Central Italy during 1000-500 BC is the development of complex societies. The study of Italian Iron Age societies often emphasizes the urbanization process and early state formation in the Tyrrhenian area and the adoption of these models in more inland regions. This article focuses on the development of the community and culture of the Sabines in the Tiber valley. Recent excavations and surveys give us an opportunity to study the development of these Sabines, one of the most important peoples in pre-Roman history, in more detail. Urbanization and early state formation do not fully explain the social-political character of the Sabine ‘frontier’ communities and the expression of identity in the material culture. Interregional contact – in which the Tyrrhenian area played a central role – was crucial to the formation of centralized communities in the Sabina Tiberina and the cultural identity of the local elite.
:download pdf:

This article reviews the current state of research on the rare class of Etruscan pottery cinerary urns with mobile figurines from the Chiusi region (2nd half of the 7th century BC). Central to the discussion is the case of the so-called “Coleman” tomb group. Since 1935 a vase of the above-mentioned type and some other Etruscan artefacts from the collection of the American industrialist Robert H. Coleman (1856-1930), currently preserved at the Penn Museum in Philadelphia, have been associated with a Clusine ziro burial excavated in 1881. However, most of the objects of the alleged tomb group, including the vase, have proved to be forgeries. Problems also surround the five other complete vases with mobile figurines. Doubts about the authenticity of two pieces are confirmed by thermoluminescence testing. Another vase is too heavily restored to determine its precise condition and date. As for the remaining two vases, both believed to be genuine, one was stolen from the Chiusi museum in 1971 and the other is in a rather fragmentary condition, as a recently executed restoration has shown.
:download pdf:

The Antikythera Mechanism: in search of planets in the world’s oldest computer

The Antikythera Mechanism is the most extraordinary example of Greek technological development and expertise known from antiquity. This amazing piece of geared technology could best be described as a complex mechanical computer dated to the second century before Christ which tracks and predicts various cycles of the Sun and the Moon. One of the major questions concerning the mechanism that has puzzled scholars for over one century now is whether the motions of the planets were also predicted by the device. Though many clues have been discovered, no direct evidence has been found in the surviving fragments of the Antikythera Mechanism. This article describes our work in analyzing the various possibilities for a planetary extension. Different ways in which the positions of the planets could have been represented on the mechanism are explored and we focus on one of these ways on the basis of actual computer reconstructions.
:download pdf:

This article deals with public constructions in Roman Africa (between 50 B.C. and A.D. 425) from an economic-archaeological and conjectural perspective. Economic archaeologists and historians are always interested in conjectures of past production and consumption as to gain insights into the structure, scale and degree of successfulness of the ancient economy and its changes through time. As to reconstruct such a conjecture, the author has chronologically ordered all instances of public constructions from a large dataset by Hélène Jouffroy (Jouffroy, 1986). This he could do, due to some methodological improvements, with greater precision and far more data than was possible in previous assessments of the same dataset by others. In his article the author describes and interprets the reconstructed curves of both the African construction volumes and the changes in the total stock of public buildings. An increase in the African construction volumes starts to be significant from the late first century A.D. on, reaching a peak in the mid-second century; after a short period of moderation an absolute zenith is reached during the reign of Septimus Severus. Then, after the Severian period, the African construction volumes plunge into what seems to be the Third Century Crisis. , A new high-tide initiates during the late fourth century however; thereafter there’s but a steep decline. Interestingly an absolute zenith in the total stock of buildings is reached at the height of the construction volume ‘crisis’. Lastly, the author compares the results presented in this article with those that were recently published on public constructions in Roman Italy in his contribution to TMA 45, titled Public Constructions in Roman Italy (225 B.C. – A.D. 425) a conjectural approach.
:download pdf:

Cult places and cultural change in Republican Italy. A contextual approach to religious aspects of rural societies after the Roman conquest 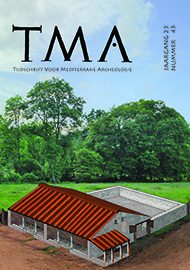