Architecture and archaeology: a mental cinema?

In this paper I draw attention to the great potential of researching the architectural evidence in archaeology. In a model of architectural studies I have mapped the two main pillars of architectural studies. These are the reconstructions and the social interpretations that can be read from the archaeological evidence. The question is whether social interpretations can be directlyderived from the archaeological traces or through reconstructions. Simultaneously, I highlighted the fact that the architectural artifact is a difficult one, because in publications the distinction between the artifacts and the reconstructions is not always made clear. As an example, the reconstruction of a canonical domus at the foot of the Palatine has been discussed. The assumption of this very hypothetical reconstruction, which is inspired by the so-called mental cinema of Andrea Carandini, can lead to risky conclusions regarding social and economic organisation in the Archaic period in Rome. The danger is to formulate hypotheses based on hypotheses.
:download pdf:

The reconstruction of Roman buildings is a scientific challenge. Working within the framework of Roman architectural theory and practice, the reconstruction of a building is based on an analysis of the building’s remains and a range of other sources, such as relevant comparable buildings, depictions of architecture on Roman historical reliefs, wall paintings and mosaics as well as texts of ancient writers (and more). Combining all the evidence of a building’s appearance results in the elimination of many unknown factors, thus leaving the most likely solution. Research aiming at defining what (Roman) buildings looked like generates knowledge and results in a 3D image representing this knowledge in every detail in a way that is attractive and easily comprehensible to the public. Few other forms of archaeological research provide such a natural combination of knowledge development and public presentation.
:download pdf:

The Art of Reconstruction.
On the archaeological value of 3D-simulations in analysing pre-Roman temples and roofs

This article highlights the ways in which ancient temples in Italy constituted manifestations of political power. First, it examines the existing data (visual and textual) and prevailing views about important aspects of temples, such as architecture, roofdecoration, and environment, against the background of social transformations at the end of the 6th century BC. Second, it aims at factual, visual and virtual reconstructions of these temples, in order to visualize and analyse their monumentality and impact and provide a new impulse to the reconstruction and interpretation of hitherto invisible monuments. The scholarly relevance is grounded in the deliberate combination of (traditional) archaeological and cultural-historical views with innovative methods of research (i.e. virtual reality simulations). Virtual reconstruction does not aspire at rebuilding the past, but at visualizing what we know about the past. In other words, virtual reconstruction synthesizes a consistent visualization of manmade structures, based upon all available sources. In this way, virtual reconstruction can be viewed as a multidisciplinary activity, always susceptible to change. The first part of this paper presents the results of a pilot project focusing on a temple excavated at Satricum in Latium. These results have shown the importance and valorisation of reconstructing a monument by means of 3D simulation. The second part of this paper investigates another roof type belonging to a contemporary temple, found very close to the site of Satricum, and destroyed in the sixties of the last century. This invisible monument will be the subject of an investigation using 3D reconstruction. The importance of this monument lies in the fact that it was part of a group of strongly related early Roman roof systems: the so-called Veii-Rome-Velletri Decorative System and the Rome-Caprifico Variant (ca. 540- 520 BC). These First-Phase roofs have been studied by a group of international specialists in the field on several occasions and somehow remain fascinating – and troubling – because of their chronology and imagery, as well as their regional and historical setting, especially in the context of the “legendary” tyrant Tarquinius Superbus.
:download pdf:

In this article the view is advocated that archaeologists should focus less on a three-dimensional reconstruction of architecture. Instead, we ought to think more about the reasons why buildings are shaped and organized the way they are. To achieve this, we should move beyond a mere functionalistic explanation, and incorporate behavioral studies and environment psychology, as suggested by Amos Rapoport. These reflections are taken into consideration in a case study of Greek Bronze Age house. The two-dimensional data of house plans are turned into reconstructions, but not only of the way in which people shaped their house. A reconstruction is also given of how people used their built environment to communicate and construct their identity. The data suggest that during Early Helladic III and the early Middle Helladic (ca. 2200-1800 B.C.) people identified primarily with their household but also with the community at large. Architectural changes towards the later Middle Helladic (ca. 1800-1700 B.C.) suggest that some households started to distance themselves from the collective identity. It seems they started to construct a new identity (possibly based on a larger social group), which led to competition between households.
:download pdf:

This paper discusses how prosperity and changing consumption patterns in second century BC Pompeii shaped a climate that resulted in dramatic changes in the city’s commercial landscape and led to investment in commercial space on an increased scale and in new contexts. The analysis particularly zooms in on the material remains of tabernae and aims to show how the standing remains of these facilities reveal the investment context in which they were built. In the second century BC, private house owners start surrounding their houses with tabernae on an hitherto unseen scale, while at the same time, tabernae become a much more prominent part of public architecture, and investors start building independent rows of tabernae on bare plots of land in the city centre. This indicates the large degree in which commercial priorities actually shaped the urban landscape, already in a relatively early period.
:download pdf:

This paper explores the spatial organisation of Ostia’s Insula IV ii, an urban neighbourhood counting 14 individual buildings. The Insula boasts an impressive variety of land-uses, including a number of shared internal courtyards. Insula IV ii has hitherto not received much attention, and it is for the first time that the city block has been studied in its totality, not only taking account of all its buildings, but addressing the neighbourhood as a collectively shared spatial and social entity. The spatial analysis of the Insula’s architecture (all buildings and the shared courtyards) revealed a number of interesting insights including the ability to promote activities in the inner courtyards and to engender interaction and social encounter through its specific spatial structure.
:download pdf:

Material Connections in the Ancient Mediterranean: mobility, materiality and identity

The Cambridge companion to the Aegean Bronze Age

The Oxford handbook of the Bronze Age Aegean

Ancient Egyptian Tombs: The Culture of Life and Death 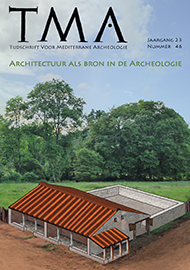