‘Mycenaeans’ on Rhodes. A neo culture historical re-evaluation of the archaeological evidence

In this article, the ‘Mycenaean’ occupation in the southwest coast of Anatolia (present­day Turkey) is revisited. The issue at hand is whether the large number of ‘Mycenaean’ artifact types (e.g. pottery, jewelry, seals, weapons and tomb­-types), which have been found in the southeast Aegean, is indicative of the presence of ‘Mycenaean’ immigrants or of local ‘peoples’ having adopted traits of ‘Mycenaean’ cultural origin. The approach used in this article, which is referred to as a neo­culture historical approach, is based on a contextual analysis of the archaeological record of Late Bronze Age Greece. The particular focus is on the (chamber) tombs. In the final section of the article, some of the results of these analyses are compared with a selection of the finds from the cemetery of Ialysos on the island of Rhodes.
:download pdf:

Retracting the divisions? Fresh perspectives on Phoenician settlement in Iberia from Tavira, Portugal

Near Eastern burial customs are attested outside the Levant in territories that fell into the orbit of the so­called Phoenician ‘expansion’ in the Mediterranean, around the ninth to the sixth century BC. Yet, in what is now Portugal, no evidence for Phoenician necropoleis had been attested until recently, leading to the hypothesis that small, marginal communities lived on the verge of indigenous polities, in the periphery of the flourishing Phoenician centres in the south of Spain. The recent dis­covery of a Phoenician sanctuary and a necropolis in Tavira (ancient Balsa), in what appears to have been a settlement of a predominantly Near Eastern character calls for a re­evaluation of this ‘lone­traders’ model. More crucially, the particularities of the burial customs at Tavira highlight once again the still dominant methodological constraints and inconsistencies that have afflicted the interpretation of the Phoenician impact in Iberia since its nascent stages, crudely categorizing it into coastal ‘colonies/trading ports’ and inland ‘indigenous settlements’ – a division that cannot be maintained.
:download pdf:

In the field, an archaeologist is largely reliant on the registration and interpretation of visible physical remains and stratigraphy. Depending on the means available and/or professionalism of the particular project (s)he is involved in, an array of auxiliary scientists and the implementation of certain methods and theories can provide information that would otherwise remain elusive. However, soil micromorphology is still frequently absent from archaeological practice, in spite of its proven value. Given the right circumstances, micromorphological analysis of undisturbed soils can contribute significantly to the understanding of how spaces were constructed and used. Moreover, it can provide details about periodicity and frequency of use, as well as post­depositional processes. This paper advocates the value and advantages offered by soil micromorphological analysis as a discipline for clarifying use of space and to point out to what extent the representativity and validity of the soil record have been affected by turbation processes. Lastly, it recommends the full integration of the discipline as standard practice for archaeological fieldwork.
:download pdf:

In his book about code­switching Wallace­Hadrill writes about the uselessness of hybridization in his study of past cultural interaction and the usefulness of his own model. In this article the uselessness of hybridization is questioned. To understand the difference between both theories, first an explanation of both is given (although code­switching is only briefly explained). Afterwards tomb paintings in the cemeteries of Poseidonia are considered in order to find out whether hybridization, in opposition to code­switching, is still useful in interpreting the ancient past.
:download pdf:

The Aurelian Wall and the Refashioning of Imperial Rome, AD 271-855

State formation in Italy and Greece; questioning the neoevolutionist paradigm

Fora, stationes, and sanctuaries: the role of minor centres in the economy of Roman Central Italy

Keeping in touch in a changing world. Network dynamics and the connections between the Aegean and Italy during the Bronze Age – Iron Age transition (ca. 1250 – 1000 BC) 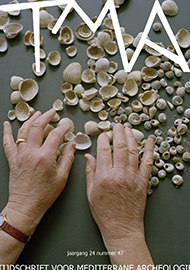