Karian, Greek or Roman? The layered identities of Stratonikeia at the sanctuary of Hekate at Lagina

In the Greek world after Alexander the Great, urbanization took place at an unprecedented rate and scale. Based on the Greek model of the polis, this introduced a new landscape of social and political organizations, which had a great impact on the complexities of local and regional identities and how these were displayed. Religion played an important role in this process. As case study for these issues, this article examines how Stratonikeia in Karia (Asia Minor) used the sanctuary of Hekate at Lagina as an instrument to integrate the social and political identity of the local Karian population into the interstate world of Greek civic networks and Roman authority.
:download pdf:

Pottery distribution patterns are often taken for granted and seen as self-explanatory. Interpretations usually focus on trade and economy. Most research concentrates on the similarities between sites, e.g. the presence of a certain ware or shape, whereas distributional differences have received less attention. This paper adopts a different view and analyses the tableware of Hellenistic Sardis from the perspective of local consumers. Tableware distribution patterns are not coincidental, on the contrary, they reflect the choices of individuals and communities. By zooming in on Hellenistic Sardis this paper shows that local producers and consumers were making different choices than contemporaries elsewhere. It is shown that these choices are reflective not only of the opportunities available to Sardian consumers, but equally reflect the identity of the community as a whole and its engagement with the wider Hellenistic world.
:download pdf:

Gladiatorial displays and the imperial cult in Asia Minor. The case of Pessinus

This article focuses on archaeological evidence for the imperial cult and its vital role in the introduction of Roman blood sports in Asia Minor. In central-Anatolian Pessinus, the introduction of the cult of Sebastos (the Greek equivalent of Augustus) came with the erection of a purpose-built gladiatorial theater which constituted an integrated unit of the Sebasteion. Epigraphic, architectural, numismatic and ceramic evidence indicates that construction works took place during the last years of the reign of Augustus. The date of construction of the theater (and temple) may be reflected by recently reanalysed epigraphic evidence which suggests that a priest of the imperial cult organised gladiatorial games in Pessinus in AD 9. It looks as if elites in Pessinus were committed to integrating the imperial cult in the townscape from early on. However, this was done by adopting Roman architectural models in an eclectic and nonconforming manner which allowed flexibility and non-Roman traditions to persist.
:download pdf:

Fringe archaeology: the study of the eastern suburb of Sagalassos (SW Turkey)

We are brought up with the image of the ancient city as a compacted stronghold within an oasis of open farmland, only interrupted by the occasional villa. The picture, as always, is a lot more complex. Town walls could rarely confine the city sprawl associated with a growing population, nor were these the only markers that define the urban boundaries. Moreover, several activities were excluded from the city centres for reasons of taboos, safety or simply because of space limitations. It is difficult for us to imagine the bustle going on outside many ancient town walls, not in the least because these transitional zones between the urban and the rural area have only rarely been the focus of archaeological research in the Mediterranean. This article wishes to address the topic through one specific case study: the Eastern Suburbium of Sagalassos, a mountain site in southwest Anatolia. The area under study manifests more than a millennium (Classical to Early Byzantine Era) of human activities that were ‘banned’ to the city’s fringes. An important part of these activities are of an artisanal or funerary nature, competing for space with spectacle buildings, communal organisations and waste dumps.
:download pdf:

Exploring the fine line between Jewish and pagan. A socio-contextual study of the House of Dionysos, Sepphoris

The House of Dionysos is probably the most salient example of private architecture that has been uncovered in Sepphoris (northern Israel) so far; it is a symbol of the settlement’s cultural transformation during the second to third centuries AD. Earlier research focused extensively on understanding who may have lived in such a lavish peristyle house with a triclinium of which the mosaic floor depicts scenes from the life of Dionysos. Could the household have been Jewish, the Jews being the predominant population group in Sepphoris at that time? This article aims to contribute to this debate by examining the House of Dionysos as a social space within the wider context of peristyle housing in the Roman Empire. By concentrating on the architectural differences especially, this article ultimately argues that the house should be understood as arising from a local development. The owners of the House of Dionysos seem to have borrowed and adapted the cultural concept of peristyle housing, with all its physical elements, according to their particular understanding of the house as an introverted social space. Consequently, these most probably Jewish occupants seem to have been competent in both cultural traditions from which they draw upon in the construction of this house. Put differently, both local Jewish and Roman norms and values were understood and respected.
:download pdf:

Remains of a Jewish household in Perea? The results of the first excavation season at Tell Abu Sarbut

Resistance against globalization and hellenization was powerful among some Jewish communities during the first centuries BC and AD. This found its expression in the material culture, such as the rejection of decorated table vessels, Italian-style cooking pans and foreign modes of dining. Instead, locally made cooking vessels, undecorated lamps and certain chalk stone vessels were used as markers of ethnic solidarity and, perhaps, religious attitudes. This `household Judaism’ (Berlin 2005) has been documented widely in the areas of Judaea, Galilee and Gaulanitis; the traditional Jewish regions west of the river Jordan. Another region with many Jewish inhabitants, Perea across the Jordan, has as yet not yielded any of these traits. The renewed excavations of Tell Abu Sarbut in the eastern Jordan Valley may readily change this picture. What started as research into a local rural community from the third century AD, could now include the excavation of the remains of a Jewish community from the first centuries BC-AD.
:download pdf:

The Udhruh lines of sight: connectivity in the hinterland of Petra

The region around Udhruh, in the hinterland of the Nabataean Capital Petra in southern Jordan, was actively exploited in antiquity with investments of great effort and ingenuity. In the 48 sq km research area around the town of Udhruh, best known for a Roman legionary fortress, a communication system consisting of eight watchtowers on territorial markers has been retrieved. This system was built in the Nabataean era for the protection and communicative control of the water management and field systems and the possible caravanserai of Udhruh. The microregion of Udhruh was through this signalling system not only connected with Petra, but also with its network along the trade routes. In the Roman period the Udhruh-region became part of a different globalised network through this connectivity: the Roman armies, although the security of the site and the agro-hydrological schemes remained important.
:download pdf:

Colonia Augusta Achaica Patrensis, cemetery and identity in a Roman colony in Greece

Patras, a harbour town in the northwest Peloponnese, was colonized by Augustus in order to benefit from its strategic location for both communication with the West and to exert control over the region. When the colonists, who were veterans of the Roman army, arrived at Patras they found a city with a history of over 300 years. The established order was overthrown as the original inhabitants of Patras had to give up their lands and their rights in favour of the Roman immigrants, who were now landowning citizens of the colony. These major disruptions meant that social roles had to be redefined: the cemetery seems to have been the place to do so. This paper discusses how the various groups or individuals negotiated their social and cultural identity in the cemeteries of the newly founded colony.
:download pdf:

The Cambridge Companion to the Roman Economy

The Archaeology of the Holy Land. From the Destruction of Solomon’s Temple to the Muslim Conquest

Stone and Dung, Oil and Spit. Jewish Daily Life in the Time of Jesus

Kingdoms and Principalities in the Roman Near East

The Ancient Near East, a life! Festschrift Karel Van Lerberghe

Edge of Empire: Pagans, Jews, and Christians at Roman Dura-Europos

Mapping the Via Appia 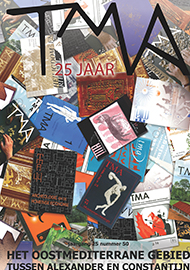