Past, present and future: towards mediterranean archaeology 2.0

In this article the author explores the impact of the commercialisation of archaeology over the last decades. Through his own experience he is able to analyse the long term development in both Dutch commercial archaeology and academic Mediterranean archaeology under the influence of new heritage laws and heritage management. It is obvious that professional archaeology has thoroughly changed and archaeological work and job opportunities have undesirably become subject to economic conjecture. But is contract archaeology really helping us to preserve our heritage responsibly? And where does it leave the Dutch Mediterranean archaeologist? The author foresees a future in which academia and companies should collaborate to make foreign archaeology accessible to the Dutch archaeological ‘market’, so that archaeologists can actually be employed in their chosen field.
:download pdf:

The study of secondary burial in Mycenaean mortuary traditions: a new approach to the evidence

This paper presents a main issue within Mycenaean mortuary studies and proposes a realistic solution. The problem in past studies of Mycenaean mortuary data was the lack a fully contextualized and bioarchaeological approach which meant that only a portion of the mortuary record was examined. This article briefly addresses those associated problems and provides an interdisciplinary approach to the diverse mortuary data using three case study sites from the region of Achaea: Petroto, Chalandritsa-Agios Vasilios and Portes. By incorporating archaeological context, social theory, and a bioarchaeological analysis of human skeletal remains, researchers can adopt a more holistic approach to understanding the Mycenaean way of death.
:download pdf:

Copper ingots, bronze axes and composite daggers: the role of metalwork in the transition from Copper Age to Bronze Age networks in Central Italy

The defining element of the Copper Age-Bronze Age transition in Central Italy is the Early Bronze Age hoarding phenomenon. Traditionally hoards of copper ingots, bronze axes and composite daggers have been studied as a single phenomenon. Regional differentiation between the Tyrrhenian and the Adriatic sides of the peninsula can be discerned in the composition of hoards and in raw material composition of their constituent objects. The hoarding phenomenon also shows a marked increase in production, exchange and deposition of metalwork in the course of the Early Bronze Age. Taking the evidence for synchronic and diachronic differentiation together, the author argues that metalwork was at the heart of network changes from the Copper Age to the Bronze Age. The hoarding phenomenon encapsulates a trajectory of network changes that was instrumental in the cultural integration of Central Italy as early as the Early-Middle Bronze Age transition.
:download pdf:

Despite dating problems and various research biases in the Quilici dataset, provided in the 8 volumes of the Carta Archeologica della Valle del Sinni, an overall infill of the rural landscape during the Archaic and Classical-Lucanian period (600 – 325 BC) in the valley of the Sinni river could be deduced. The farmsteads from this dataset are combined with location choices like preference for soil types or hill sides, vicinity of villages and necropoleis, as well as with the pottery assemblage found on these farm sites. Historical sources are also taken into account. Out of this combination the picture of two different landscapes emerged. For the Archaic period it seems that the society in the Sinni valley was largely village based, with production of food crops for the villages on nearby arable fields, and with only a few farmsteads spread throughout the valley. The next, Classical-Lucanian period witnessed a change to a farm based society. Many farms were built, especially in the fertile area of the Sant’Arcangelo Basin. Here a surplus was produced for the increasing population of the valley as well as for the expanding Greek colony of Herakleia, in the coastal plain of the Siritide.
:download pdf:

Etruscan bucchero pottery is more than a mere imitation of metal or Near Eastern prototypes and it deserves a more detailed study of its origins. It appears that bucchero designs are characterised by a distinctive mix of indigenous and non-local elements and influences from other material categories are present. Furthermore, bucchero pottery itself was widely distributed and in turn influenced craftsmen outside of Etruria. Bucchero pottery as a case study seems to have great potential in contributing not only to a better understanding of Etruscan cultural contact, but also to the on-going Mediterranean cultural contact debate.
:download pdf:

Negotiating Identity in the Ancient Mediterranean: the Archaic and Classical Greek Multiethnic Emporia

Egyptianizing Figurines from Delos. A study in Hellenistic Religion

Monumentality in Etruscan and Early Roman Architecture. Ideology and Innovation

The complete archaeology of Greece. From hunter-gatherers to the 20th century A.D.

Divining the Etruscan world. The brontoscopic calendar and religious practice

The integration of Latin cults into Roman religion: memory, cult practice and the construction of religious identity

Venationes in Africa Romana: an analysis of the cultural significance and social function of hunting spectacles in Roman North Africa

Pithoi. Storage practices and the Cretan city-state during the 1st millennium 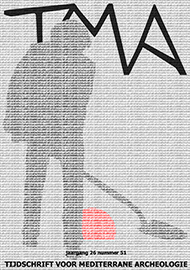