Technological change in the Laurion silver mining area. An archaeological contribution to the study of the Athenian economy

This study sets out to explore technological change in the Laurion silver mining industry within the wider debate on the Athenian economy. The study of ancient technology has known a turbulent history, which was greatly determined by primitivistic and substantivistic views, specifically those formulated by Moses Finley in 1973. Under this influence, the debate on economy and technology was immersed in a particularly negative atmosphere: the ancient economy was supposedly characterised by stagnation, and hence, technological advancement could never be accomplished. In spite of the fact that several of these ingrained prejudices have been set aside and technology is now considered an important agent in history, present research is still problematic in two distinct respects. The first problem is the overemphasis on Roman technologies, with the underestimation of Greek realisations as unfortunate corollary. The second issue is the neglect of the archaeological evidence in the scientific discourse on Greek technology. There is no better case study to tackle these issues than the Athenian silver mines at Laurion, located in southeast Attica. A close study of the archaeological evidence has revealed remarkable technological innovations. For instance, miners and metallurgists experimented and improved their technologies continuously. Some of these advances were small and random in nature but others, such as the hydraulic mortars, affected more far-reaching developments that enabled the reorganisation of the silver business. These results challenge the primitivistic/substantivist views that suggest the lack of economic growth and technological advancement in ancient Greece, but will hopefully also form a stimulus for a different, less biased debate on the ancient Greek economy in which archaeology has a more prominent role to play.
:download pdf:

The reciprocity between architecture and man: power representation in the Mycenaean megaron-palaces

In archaeology, we want to reconstruct human activity, namely human experiences and social activities, that took place on an archaeological site. These two aspects are the most difficult to comprehend for the Late Helladic IIIB society of Mycenaean Greece from which there are no literary sources. Architecture, as it is the built-environment in which the social activity took place, is a great source of information to fill this gap. The relationship between humans and architecture contains a certain reciprocity as man creates architecture, but architecture facilitates the activities and experiences obtained by a visitor. Creating a sense of movement and control and incorporating symbolic representation within a built-environment can be perceived as non-verbal communication with the visitor. This article presents analyses of the Mycenaean megaron-palace of Pylos and comparative material from Tiryns. An integrative approach, combining space syntax methodology with material analyses and an anthropological perspective on power architecture, is used to gain a new perspective on the social activities within the ruling class of this society.
:download pdf:

Latium Vetus witnessed a rapid development of city-states in the region from the sixth until the beginning of the fifth century BC. With an average distance of 10-15 km in between these city-states, intensive interaction is assumed. In this paper such interaction is demonstrated by using the theory of Peer Polity Interaction (or PPI), introduced by Colin Renfrew in 1986. PPI assumes that neighbouring socio-politically independent polities – in this case city-states of equal complexity such as Ardea, Lanuvium, Velletri, Satricum and Lavinium – compete with each other through various networks of interaction and communication. This case study illustrates how contact between these cities resulted in a temple building competition amongst them.
:download pdf:

Empty tombs in a new light. A study of the Late Orientalising and Early Archaic graves from Crustumerium(Italy) (ca. 650-500 BC)

This article aims to shed light on the (almost) empty tombs from the Late Orientalising and Early Archaic periods in Crustumerium (Central Italy). Whereas the tombs dating to the Early and Middle Orientalising periods were generally quite wealthy, containing personal ornaments and banqueting sets, the later dating tombs were almost completely deprived of objects. In addition, the funerary architecture for latter periods was generally less refined and many tombs were used for more than one burial. Furthermore, these tombs show a much larger variety in their orientation and often interfere with existing tomb constructions. Whilst the reduction of the funerary wealth has often been explained as a result of sumptuary legislation issued in the Twelve Tables, it is argued in this article that the changes in the funerary ritual should also be related to processes of urbanisation and state formation. Aristocratic families presumably shifted their focus of investment to the urbanised centres and away from the funerary realm. A change in the ideological perception of death and the afterlife may further explain why deceased relatives were no longer accompanied with an elaborate set of objects.
:download pdf:

Between legacy and legacy data: the heritage of a lost landscape around Crustumerium (North-Latium, Italy)

Archaeological field surveys from the 1970’s suggested that there was a considerable increase in the number of sites in the territories of Latin settlements such as Crustumerium, Fidenae, Ficulea and Collatia during the Orientalising and Archaic period (seventh and sixth century BC). As a consequence, there was a subsequent period of decreasing exploitation of the countryside from the end of the Early-Republican period onwards, when these territories fell under the influence of Rome. Although the data from the 1970’s surveys is both extensive and valuable, more recent data from the 1990’s surveys demonstrate that this model can no longer be retained. Moreover, the increased establishment of settlements during the Archaic period (the “Archaic boom”) was much less intense than previously thought. A critical reassessment of the dating evidence from all survey data necessitated the reconsideration of the chronological developments in the areas to the north-east of Rome in these periods. Instead of a period of growth followed by a period of decline, the data indicates a continuously increasing exploitation of the countryside from the Orientalising period until the Imperial period. In light of their analysis the authors emphasize the value of legacy data, but also stress the importance of a critical evaluation of the compatibility and quality of the source material.
:download pdf:

Two oxen ahead: Pre-mechanized farming in the Mediterranean

The sea and land routes of Southern Euboia, ca. 4000–1 BC. A case study in mediterranean interconnectivity

Ways of life and death in a pastoralist landscape: an archaeology of nomadism in Jordan’s Black Desert between Hellenistic and Early Islamic times

The agricultural economy of Islamic Jordan, from the Arab conquest to the Ottoman period 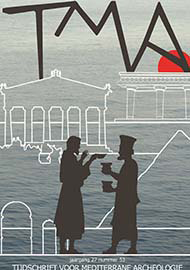