For a good understanding of ancient food economies, quantitative data are indispensable. Quantitative data on variables such as income, taxes and food prices can aid us in reconstructing living standards, socioeconomic inequality and economic performance in past societies, and even allow comparisons through time and space. This contribution quantifies data on grain shipments and sailors’ rations from the recto of P. Amiens + P. Baldwin (Ramesside period, mid-20th Dynasty). The text records the transport of grain by a fleet of 21 cargo vessels belonging to the temple of Amen-Re at Karnak that was supplied by various domains. This paper quantifies the volume, weight, edible weight and corresponding energetic value of the cargo and calculates the minimum size of the domains and number of individuals that could be fed with these grain deliveries. The rations of the sailors are also quantified and compared with wages and prices from Deir el Medina. This paper also demonstrates that, contrary to common scholarly opinion, emmer wheat was more expensive than barley during the Ramesside period.
:download pdf:

In the Sub-Mycenaean and Protogeometric periods (1100-900 BC) the old Mycenaean world was changing. Social structure, material culture, and diet underwent varying degrees of transformation. This paper focuses on dietary changes during the post-Mycenaean period in the Greek mainland. Carbon and nitrogen stable isotope analyses conducted on human bone collagen indicate diversity in dietary practices both within and between communities in Thessaly. While the data show that the diet largely consisted of C3 resources, a significant C4 signal is also apparent. Furthermore, animal protein consumption is high, but in variable proportions at each site. Archaeozoological and archaeobotanical studies help understand the food economy, while the study of the social structure sheds more light on the cause of the dietary variation observed.
:download pdf:

Famine, disease and demography in the Roman mediterranean world

Famine in the Roman world was not an on and off phenomenon, as there was a continuous fluctuation between times of relative scarcity and abundance. The poor regularly ate so-called famine foods, and many died of deprivation, under ‘normal’ conditions. In times of hardship or bounty, the consumption of inferior foods and the threat of death ascended or descended the rungs of the social ladder indiscriminately, demarcating no clear boundary between famine and normality. Fodder and other famine foods kept many individuals alive, but could not ward off the effects of starvation in the worst of crises. Food shortages caused mass mobility, which in turn led to the rise of epidemic diseases. The comparison with later times shows that most victims of famines died of infectious diseases rather than starvation and that all social classes died at the same rate – a phenomenon that was observed by ancient authors too.
:download pdf:

This paper aims to assess the accessibility of pepper to average Roman consumers in terms of price by quantifying the cost of ‘meaningful’ culinary pepper consumption. To this end, by performing measurements on modern pepper samples, we first quantify Roman pepper prices and units of measurement more concretely. What was the cost of a peppercorn, and how many were there to the libra and other units? We then define and quantify ‘meaningful’ pepper consumption using modern consumption statistics and cooking data. Subsequently we compare these data to Roman incomes. We show that, if only looking at price, regular culinary pepper consumption would even have been possible for lower income consumers. In addition, we also used our method to quantify the value of amounts of pepper in literary sources and archaeological finds. We look in more detail at Apicius’ De Re Coquinaria, which features many recipes with infeasibly high quantities of pepper. We show that in most recipes where the amount of pepper is explicitly quantified and large, whole peppercorns instead of ground pepper was used. We show that this excessive yet inefficient usage of pepper as ‘garnish’ is a form of conspicuous consumption. We argue this may be a response to normal, efficient pepper use, becoming too commonplace and not distinctive enough for elites. We also explore the price difference between the different types of pepper the Romans consumed. We explain these differences from the perspective of production cost through assessing traditional production processes and agronomic statistics.
:download pdf:

Fuel is a little considered part of the ancient economy. The production and consumption of food constituted one of the major uses of fuel in the Greco-Roman world. It was required on an industrial scale in bakeries, temples and probably bars, but it was also required daily in people’s homes mostly for cooking food (in the kitchen, and in the triclinium), and also for sacrificing to the Lares. Wood and wood charcoal were the main fuels in the Roman world, but non-wood fuels including agricultural waste (especially olive pressings), were also consumed. This paper reviews the types of fuel used in the preparation of food, both commercially and domestically, with reference to examples from the Greco-Roman world, especially Pompeii. The relative heat values of different fuels are discussed, together with an overview of the supply constraints and probable volumes required.
:download pdf:

The texts of the ancient agronomists elucidate that Roman farmers knew of many ways in which to train and cultivate the vine. An important distinction in Latin literature is the use of the terms vinea, the classic intensive vineyard, and arbustum, an extensive growing system in combination with cereal culture and fruticulture. This article briefly discusses the pros and cons of both techniques and their respective applications in Roman Italy. Through an enlightening survey of the arbustum in the agricultural manuals of Varro, Columella and Pliny, and by making comparisons with the later alberata system in 15th-20th century AD Italy, the author argues that the importance and the distribution of this vine cultivation technique in Roman Italy has long been undervalued.
:download pdf:

The earliest attempts to identify economic and edible plants from Pompeii came from ancient textual and art historical research. However, in more recent excavations of the site’s bicentennial ‘archaeological history’, a handful of influential publications on the archaeobotanical evidence, mainly from material in the storerooms, have been produced and added key information to this discussion. This growing corpus of data, in combination with the legacy archaeobotanical record, has shed new light on the diachronic patterns of food and cuisine for the city of Pompeii, regarding it as a fully urban consumer society by the first century AD within the Roman Empire. This article synthesizes the available legacy and recent archaeobotanical evidence that both testifies to the established ‘standard’ Mediterranean diet for Pompeii and demonstrates changes in the number and diversity of plant species recovered. These changes represent a significant shift in the economic division of the city’s inhabitants, and therefore its history.
:download pdf:

The role of chicken in the medieval food system: evidence from Central Italy

Although domestic fowl is often found at Italian archaeological sites at least from the sixth century BC onwards, it became widespread only in the Roman period. Throughout the Middle Ages, chicken played an important role in the Italian food economy as attested by the substantial number of bones of this bird recovered from archaeological contexts. This study is focused on the identification of trends in chicken exploitation that can be linked to production and/or consumption. The analysis of bone assemblages shows an increase in the frequency of chickens from the 13th century onwards. In urban contexts, which reflect consumption rather than production, anatomical parts with a higher meat value are more frequent. Chickens were probably bred at rural sites, as attested by age and sex evidence. Early medieval chickens from Rome appear to have had the largest body size. The requirements of the market did not seem to have imposed an increase in chicken size in later centuries.
:download pdf:

In this paper we present the results of the archaeobotanical analysis of impressions of plant remains encountered in the profile and on the surface of clay fragments of ?awabin. The fragments originate from Mamluk contexts at the site of Tall Hisban located in southern Bilad as-Sham (modern Jordan and Palestine). This study models the formation process of the botanical component of the ?abun as a context and explores the underlying processes explaining the presence of the different kinds of impressions. After providing a description of the ?abun and consulting historical and ethnographic descriptions, we present our model and interpret the results of the archaeobotanical analysis through it. Furthermore, the archaeobotanical data obtained from the analysis of ?abun fragments helps contribute to the knowledge of the Tall Hisban food economy. The importance of barley at the site during this period is not only reflected through ?abun fragments, but more importantly are proxies for economic activities in the village.
:download pdf:

War and Society in Early Rome: from Warlords to Generals

A Companion to Food in the Ancient World

Archaeology of Food – an Encyclopedia

The Material Life of Roman Slaves

Innovating objects. The impact of global connections and the formation of the Roman Empire (ca. 200-30 BC) 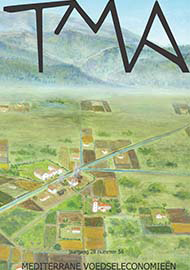