Archaeological cave research is a highly specialized discipline with a strong focus on local detail, in which geophysical methods are only marginally applied for prospection. This article presents an experimental project to test the application of two common geophysical techniques, ground penetrating radar and electrical resistivity, for the detection of prehistoric deposits in limestone caves. Four partially excavated caves in Central Italy were selected with typical cave situations: high ceilings, low ceilings, fine cave sediments, rock debris, and collapsed rooms. The available archaeological documentation of the caves provided an interpretative framework for the geophysical data. The work and results in the four caves are presented, as well as an outlook to the wider use of geophysical techniques in cave research.
:download pdf:

The coastal basins of Southern Lazio in the Early Bronze Age around the time of the Avellino eruption (Somma-Vesuvius): a welcoming place or a hostile environment?

Ongoing research on the impact of the Avellino eruption on Early Bronze Age migration to the southern basins of Lazio, where the distal Avellino tephra is preserved, aims for a palaeogeographical reconstruction of the Early Bronze Age landscape. This reconstruction pinpoints locations where both the chance of tephra preservation and Early Bronze Age habitation are highest. A suitability map indicates those areas: fluvial levees, lake edges and infilled palaeovalleys. Additionally, initial palaeo-ecological analysis of peat in the Fondi basin shows that tephra deposition did have a local effect on vegetation, but a limited effect on regional vegetation, while the overall human signal in the pollen record is weak. This suggests that the Pontine plain was thinly populated during and directly after the Avellino event. Nevertheless, the suitability map can be used to investigate yet unknown locations for Early Bronze Age stratigraphy.
:download pdf:

The importance of honorary statues on Roman fora and the possibilities of archaeological research in locating them: some case studies from Italy

This article explores the practice of dedicating honorary statues in the Roman world and, more specifically, the forum as ultimate setting for these statues. The main purpose is to reconstruct, on the basis of case studies in modern Italy, how places of statues can be localized archaeologically and where these honorary statues were situated. Determining their exact placement can enable us to reconstruct social hierarchy and some of the power relations within Roman society. The potential of combining written evidence, invasive archaeological methods and to a lesser extent urban survey methods within the study of honorary statues on Roman fora are presented here.
:download pdf:

The right of the victor

This article examines movement to the right as detected in figurative images found on different mediums on the central Greek mainland of the first centuries of the Middle Helladic period (2100-1800 BC) and the following Transitional Period (1800-1500 BC) into the Late Helladic era. This rightward movement seems to indicate victorious power of men over men, men over animals, and/or animals over animals. Some considerations are made regarding this inclination to the right and its relation to right-hand handwriting and the human biological disposition.
:download pdf:

The ‘archaeology of hate’: mnemotopes of Persian destruction in Greece

This article discusses the problematic relationship between Herodotus’ account of Xerxes’ invasion of Greece and the archaeological record. It introduces the term ‘archaeology of hate’ to refer to interpretations of material culture (whether justified or not) which confirm certain notions of enmity. This term may apply both to ancient commentators reflecting on ruined buildings and other structures in the landscape, but also to modern archaeology, which sometimes attributes destruction to certain actors as a result of uncritical usage of the historical record, and in response to political concerns. The article next reviews this ‘archaeology of hate’ for the Persian Wars as it appears in historical sources from the Roman period, and ends with the problematic nature of the archaeological evidence for the destruction reported by Herodotus for Eleusis, the Acropolis and sites in Phocis.
:download pdf:

Excavations at Chlorakas-Palloures, Cyprus, have yielded the remains of a substantial Middle to Late Chalcolithic settlement. Thus far the material remains comprise of stone walls, plaster floors, ground stone installations, many ceramic, lithic and ground stone artifacts, a few metal objects and several human burials. Similar, largely contemporary settlements have been excavated in the surrounding area. These have been described to be relatively homogeneous in layout and house variability. A reassessment of these settlements and the results from Palloures challenge this notion. Additionally, differences in raw material sources between settlements indicate that there was also significant inter-settlement variation. To clarify and illustrate these issues, in this article the results from the first two seasons of excavation at Palloures are presented and discussed in their regional context.
:download pdf:

Cult in Pisidia. Religious Practice in Southwestern Asia Minor from Alexander the Great to the Rise of Christianity

Beyond the Rivers of Babylon. Settlements and Rural Landscape in Hellenistic Mesopotamia

More than people and pots: identity and regionalization in ancient Egypt during the Second Intermediate Period, ca. 1650-1550 BC 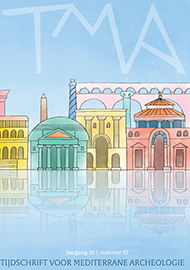