Benefactors, civic governments and public buildings in the Roman East: ‘oligarchy materialized’ or ‘an architecture of collectivism’?

Urban elites in the Hellenistic and Roman East often contributed as benefactors to public buildings in their cities. In this paper, I argue that the historical importance of these contributions does not lie primarily in the economic sphere but in the sphere of politics. Hellenistic and Roman-era Greek cities have often been portrayed as stifling oligarchies. If this view is correct, one would expect elite contributions to public buildings to reflect such an oligarchic political culture. Closer inspection of elite gifts towards buildings in the Roman East has revealed, however, that civic elites primarily contributed to the upkeep of a public “architecture of collectivism” that reflects the traditional political and cultural ideals of the Greek polis.
:download pdf:

The Upper Agora of Sagalassos: the architectural mirror of the local community

In Antiquity, public space was used as part of the construction of cultural identities which could be multi-faceted. The Upper Agora of the Pisidian city of Sagalassos (southwestern Turkey) was such a dynamic space with a rich collection of images, inscribed texts and monuments that contributed to the construction of local and regional identities. It was the space where, through the use of monuments, images and symbols, these identities were acted out to remind the community at large of who they were. This paper presents results of a research project that studies the Upper Agora as an architectural mirror of the processes of urbanisation that unfolded at Sagalassos. Urban development was one of the tools in the hands of the locals for the creation and display of identity, and by examining its constituting elements, the paper aims to establish the successive waves of urbanisation and their role in the articulation of different identity-aspects.
:download pdf:

This article examines the subject of ‘public monuments’ from an epigraphical perspective to provide a better understanding of the function of these monuments that seems to have been particular for Asia Minor in the Hellenistic and Imperial period. This is the function of Schriftträger and concerns the publication of collections of civic inscriptions on pre-existing buildings. In this article two examples from the Carian city of Iasos are discussed – the theatre, and the stoa of Poseidon and the archeion – to illustrate how public monuments turned into important civic places of memory through the presence of documents essential to the civic community on their walls. Besides this phenomenon, several characteristics of the Iasian epigraphic habit are discussed, such as the publication clauses, the different locations of publication, and the type of documents concerned.
:download pdf:

The influence of monumental construction on its human and material surroundings can be explored excellently in the context of Late Middle and Late Bronze Age (LBA) Mycenaean Greece. The overall aim of the ‘SETinSTONE’ project is precisely this: to assess if and how monumental building activities in LBA Greece impacted the political and socio-economic structures of the Mycenaean polities in the period between 1600 and 1100 BC, and how people responded to changes in these structures. We are especially concerned with the processes and practices that created such monumental and public works in the Aegean Late Middle to LBA Argolid and how these compare to contemporary structures from both Attica and Achaia.
:download pdf:

When approaching Roman bathhouses from within a larger chronological framework, they often figure as an apogee of collective baths, with the Greek-Hellenistic baths as prelude and the Late Antique and Medieval baths as epilogue. However, if we look at the cultural basis of for development and success of the Roman bathhouse, we must admit that the ideas about the power of water and its effects on the human body go back further. Mediterranean bathing habits were shaped by medical theories about the human body, not only in the Greek-Hellenistic and Roman period, but also in Late Antiquity and the Early Medieval and Islamic Period. The construction activity of bathhouses, however, is mainly dependent on the economic context. Therefore, the boom of large and luxurious bath buildings during the High Empire has distorted our view of a bathing habit that is much more continuous over the longue durée.
:download pdf:

Marble and munificence on the stage: architectural decoration of the Roman theatre

Roman society was highly hierarchical and its elite class was in constant search of means to showcase, maintain and increase their power and prestige. Sponsoring the construction and decoration of monumental, public architecture was one of the most powerful material means for this. Monumental public architecture was often decorated excessively. The orchestra and scaenae frons of the Roman theatre stand out as the object of benefaction par excellence. For the architectural decoration of Roman theatres in the Western Mediterranean area, white marble elements (capitals, column bases, cornices, etc.) were generally combined with elements in coloured marbles (column shafts and wall and floor veneer), thus creating an impressive polychromatic effect. In Southern France and Italy, this effect was achieved by using marbles imported from Greece, the Aegean Islands, Asia Minor and North Africa. On the Iberian Peninsula, locally and regionally available marbles (white and coloured) were combined with imported stones. From the second century AD onwards, valuable marbles from the Eastern Desert in Egypt were imported and incorporated in the decoration of the theatres in the Western Mediterranean.
:download pdf: 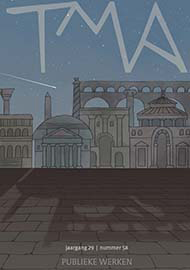