In this article, the increasingly problematic discrepancy between (archaeological) academic practice and the primary function of universities is highlighted. By law, Dutch universities are obliged to communicate the outcome of their research as quickly as possible to as wide an audience as possible. Several examples however, make clear that academics studying the ancient world are failing to do this. Especially problematic are national and international plans to terminate studies with limited job opportunities (i.e. the humanities in general), and the public’s increasing scepticism towards scientific claims (most notably climate change). Lendering identifies several factors contributing to this public scepticism, and in doing so formulates ways to restore our practice to its primary function.
:download pdf:

The Roman occupation at Tell Abu Sarbut in Jordan

The excavations at Tell Abu Sarbut (2012-2015) have revealed a building and the courtyard of another building from the Early Roman period (first century BC to second century AD). The building consisted of five rooms around a central courtyard. Many complete pottery vessels were retrieved, as well as limestone beakers, so-called Herodian lamps, terra sigillata sherds and fragments of glass vessels. The pottery repertoire was simple and consisted of cooking pots, small bowls, and small and large jars. Several different types of cooking pots were found lying together on the floors. A large number of limestone beaker fragments was retrieved from these layers. The excavations revealed that Tell Abu Sarbut was settled for the first time in the Late Hellenistic or Early Roman period when the Jordan Valley was used to produce food for the inhabitants of the Decapolis cities, especially Pella. A long sequence of walls and floors from the Early Roman period has been uncovered. The settlement seems to have been abandoned due to an earthquake or large fire, as the uppermost floors were sealed with a thick layer of heavily burnt debris. Only in the Abbasid (eighth to tenth century) and the Mamluk (thirteenth to sixteenth century) periods, the site was inhabited again.
:download pdf:

A retreat for the ill: Ancient Greek healing centres in therapeutic landscapes (ca. 500- 200 BC)

Healing centres in Ancient Greece (ca. 500-200 BC) are located away from heavily populated areas, such as urban centres and sanctuaries. It seems that these healing centres have consciously been placed in therapeutic landscapes, characterised by the presence of green space, fresh-water springs and scenic views. By analysing the healing centres by using the four aspects taken from the ‘therapeutic landscape’ concept by Gesler (2003), it is concluded that these locations have been purposely chosen. The underlying factors of this choice allow for stress-reduction (Stress Reduction Theory) and are therefore an asset for faster healing. This conclusion is based on an interdisciplinary approach, integrating data from archaeology, social geography and ancient history.
:download pdf:

This article shows that the terraced sanctuaries at Praeneste and Tibur were inspired by their Eastern counterparts in Kos and Rhodes. In addition, it argues that Rome provided social, cultural and economic avenues for spreading these architectural phenomena during the mid-second century BC Mediterranean. Given the wealth of the Eastern Mediterranean, the Romans sought to be involved in foreign trade, forming partnerships with provincial Italics. In fact, they became increasingly present in the Eastern Mediterranean as mercatores and upon their return, they became involved in the reconstruction of the sanctuaries at Praeneste and Tibur. In this context, scholars have postulated that the emulation of Roman models was a source of inspiration for their reconstruction. While the Urbs could not offer any parallels for the Praenestine and Tiburtine sanctuaries, the evidence of the mercatores’ involvement in the East was a key factor in identifying the Asklepieion on Kos and the sanctuary of Athena Lindia on Rhodes as their prototypes. Lastly, this article examines the motivations behind the reconstructions, which was a reassertion of local civic pride in light of Rome’s hegemony.
:download pdf:

For centuries, Italy and Rome have appealed artists, clerics and scholars from the Low Countries. During the 19th century, sporadic contacts between Belgian and Italian early-Christian and prehistoric archaeologists started to constitute a rather loose ‘archaeological’ network between Italy and Belgium. The foundation of the Belgian Historical Institute at Rome (BHIR) in 1902 and the Academia Belgica in 1939 laid a firm basis for the three long-term post-WWII Belgian archaeological excavations: Alba Fucens (Abruzzo), Ordona (Apulia) and Artena (Lazio). These projects were systematic and methodologically rigorous, had a diachronic and interdisciplinary approach and contributed substantially to the Romanisation debate in Italy. After the retirement of key-figure Professor Mertens (Universities of Leuven and Louvain-la-Neuve) in 1986, smaller Italian-Belgian collaborations arose and new projects were started: among others the Potenza Valley Survey project (the Marche) (Ghent University), excavations at Ostia (Universities of Liège and Namur), at Grumentum (Brussels, VUB) and Aiano-Torraccia di Chiusi (UCL). Up to now Belgian archaeological activity in Italy is characterised by an insider-outsider perspective: close collaboration with Italian archaeologists, but with a critical attitude, precisely because of their Belgian background.
:download pdf:

Social Identity and Status in the Classical and Hellenistic Northern Peloponnese. The Evidence from Burials

Glass of the Roman World

Investigating the presence of cattle dairying in Anatolia, Bulgaria and the Netherlands during the Neolithic period through osteological and stable isotopic analyses 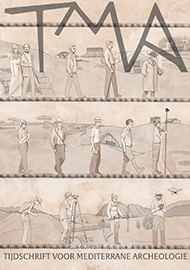