Okay, one more time early colonisation! The Bermuda triangle between archaeological, historical and literary-ideological approaches of the phenomenon


The paper discusses the substantial body of publications that resulted from the important international congress on early colonisation in the Mediterranean held in Rome in 2012, i.e. Conceptualising early Colonisation (2016), Contexts of early Colonisation (2016), and the internet publication Contextualising early Colonisation (2016) on Forum Romanum Belgicum. In particular, it deals with the problematic nature of the concept of early colonization in the light of the increasing body of archaeological knowledge on trade and interaction along the Mediterranean coasts in the period preceding the historical Greek colonization of the Archaic and Classical periods. The period of early interaction appears to be substantially longer and more variegated than perceived in traditional scholarship and therefore warrants a revision within a longer term perspective that includes Late Bronze Age and Early Iron Age Mediterranean connectivity.
:download pdf:

Empire of doppelgängers? Contextualizing the de-individualization and abstraction in the coin portraits of Diocletian and Constantine


The reigns of Diocletian and Constantine are characterized by ruler portraits that to an increasing extent left out individual traits, showing instead a rather abstract image of the emperor that would prove to be of lasting impact. This article provides context to these changes by looking at their impact as well as the way these portraits were anchored in previous practice. It shows that even though these portraits clearly broke with those of previous emperors, the transformations built upon tendencies that had started long before the early fourth century, and were the consequence of an increasing emphasis on the position of the emperor rather than on his individual traits.
:download pdf:


One of the reasons why Christianity grew during the fourth century AD was, besides the legalisation, the successful anchoring of Christian rituals in the existing Roman conceptual world. In this introductory article to the possibilities of the application of the framework anchoring innovation, I focus on Roman material anchors for Christian initiation rituals. The clergy chose, from the institutionalisation of Christianity during the fourth century, to appropriate the existing architecture of mausoleums for Christian baptisteries. With a small adaption from round to octagonal, the architecture of the baptistery and Christian symbolism came together and strengthened the ritual of baptism that happened inside.
:download pdf:

Hut structures in Central Italy: the complex study of a ‘simple’ construction


The term ‘hut’ carries a number of simplistic connotations that have hindered an unbiased study. Huts are generally seen as primitive, isolated and uniform; a highly subjective view largely resulting from our (modern) comparative perception of (elaborate) houses. Archaeologists tend to treat huts as isolated structures as there is often only secondary evidence for spatial relations. The traditional reconstruction of a nuclear family living in a single structure is a textbook example of this. By combining evidence from different settlements in Central Italy and incorporating ethnographic studies, a much more fluid perspective is advocated. Well-excavated huts at Satricum, Fidenae, Ficana and Cures Sabini suggest that facilities were shared and that life was not restricted to a single structure, a view that finds support in ethnographic models.
:download pdf:

The Collapse of the Mycenaean Economy. Imports, Trade, and Institutions. 1300-700 BCE

Chariots in Ancient Egypt. The Tano Chariot, a Case Study

The Routledge Handbook of Diet and Nutrition in the Roman World

Coining Roman rule? The emergence of coinage as money in the Roman world 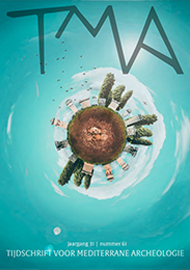