The rise of naturalism in Athenian sculpture, 480-431 before Christ. Demand, knowledge spillover and innovation


Using Athens as a case study, I argue for a technological-economic explanation for the rise of naturalism (lifelikeness) in Early Classical Greek sculpture. The Athenian growth in real income and population levels led to an increase in demand for sculpture and consequently to an increase in the number of sculptors in the city. This concentration of production facilitated the formation of technological clusters of sculptors. In these, actors unintentionally learned from each other and disproportionately improved on each other’s designs and techniques. This process of knowledge spillover, especially combined with growing competition, increased the likelihood of the occurrence of product innovations (product quality increase). The rise of naturalism in Athenian sculpture thus must be interpreted as the result of increased skill amongst sculptors due to economic growth. Athenians were increasingly able to afford the higher labour value of sculpture produced by an artistic infrastructure large enough to disproportionately generate innovations.
:download pdf:


The site of Hellenistic and Roman Sagalassos in southwestern Turkey was selected for a study of the traces of stone extraction and carving on the building stones as a function of the respective periods of construction of buildings. In this article, attention is focused on the methodology for the registration of the traces and their analysis, including a description of the different types of stone carving traces included in the analysis. The registration and the analysis have now been concluded and are based on 41 buildings that resulted in a total of 259 observation lines included in the database. The first results are presented in this article, together with some perspectives on the future of this research in Sagalassos and western Turkey.
:download pdf:

This paper applies visibility analysis to the landscape surrounding funerary sites from Iron Age Mallorca (Spain), using the burial caves of Son Maimó and Cova Monja as case studies because of the availability of data and because there are ongoing archaeological research projects at both caves. Re analysis is conducted via ArcGIS’s viewshed tool and is applied to both burial caves. Re main objective of this study is to determine if the location choice for the cemeteries was influenced by the landscape. By performing a visibility and perception analysis of the sites, we will investigate the relationship between the two cemeteries and their surroundings. We will evaluate how connected these burial caves were to settlements during the Late Iron Age (sixth to second century BC), a period of diverse funerary practices, and we will discuss whether visibility and topographical prominence were the main criterion for the selection of these sites as cemeteries.
:download pdf:

Village life in Hellenistic and Roman Asia Minor, the case of Kum and Bala near Sagalassos


Cities of antiquity and ancient urbanism receive much attention in academic literature, which is especially the case for Asia Minor. Yet, attention for villages and rural life is comparatively small. Villages, despite being relatively obscure entities mostly known through extensive survey, must have played a significant role in the settlement patterns of the Hellenistic and Roman Imperial periods as places of exchange, worship, production and (importantly) residence. This paper attempts to further characterize villages of Hellenistic and Imperial Asia Minor, using recent findings of settlements on the ancient access road to the city of Sagalassos. Intensive survey documented an ancient village in the town quarter of Kum mahallesi in the modern town of Aglasun (5 km south of Sagalassos) and a potential second village situated further north in the town quarter of Bala. Apart from numerous small finds, hundreds of spolia were recorded (including several inscriptions) that suggest monumental architecture in these sites.
:download pdf:

The impact of the Roman Empire on the cult of Asclepius

An Etruscan Affair: The Impact of Early Etruscan Discoveries on European Culture

Cooking ware as indicator for regional trade: a view from 4th-1st century BC Central Mediterranean

What went into the Melting Pot? Land use, agriculture, and craft production as indicators for the contributions of Greek migrants and local inhabitants to the so-called Greek colonization in Italy (800-550 BC)

Death in conversion? An osteo-archaeological study of burial treatment in central-west Anatolia in the Roman and Early/Middle Byzantine period (3rd-9th century CE)

‘BODICON’: BODIes of CONtact Identity negotiations and biocultural effects in the Roman colonies of Macedonia, Greece 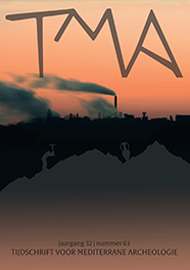